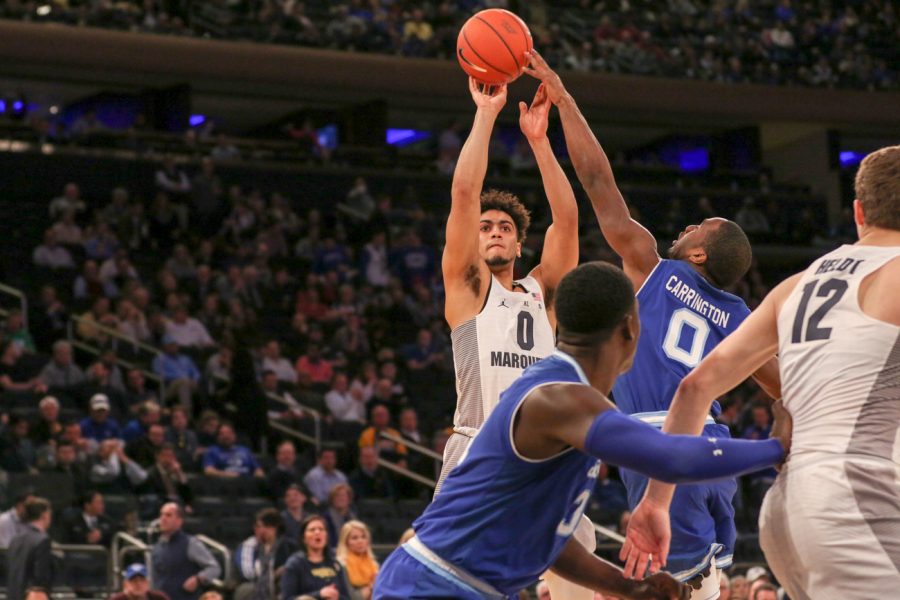 Markus Howard didn't make a basket in the first half in Marquette's loss to Seton Hall Thursday.

Not the game plan

When the BIG EAST Quarterfinal matchup between Marquette and Seton Hall kicked off the Golden Eagles looked like the sharpshooting, ball-moving offense they had been for most of the season. However, when the shots stopped falling, the ball started sticking. Despite assisting on six baskets early, Marquette finished with exactly as many assists as a team as Pirate center Angel Delgado had: nine.

“When the shots aren’t falling some guys, we feel the need to bet that person to bring it back and get us rolling on offense,” Markus Howard said. “But in times like that we just have to stick to our game plan.”

“You have to trust the pass even when the shots aren’t falling,” head coach Steve Wojciechowski said. “Our team has the ability to play some really pretty offensive basketball, and it’s when our team is trusting the pass.”

It took Markus Howard until the 16:45 mark of the second half to make his first basket of the night. Marquette’s leading scorer missed his first four shots and, until there were less than four minutes to go and the Golden Eagles were down by double digits, scored just three points. The freshman’s box score shows 16 points on 3-for-6 from 3-point range and 7-for-7 from the free throw line, but he missed all four of his two-point shots and he didn’t start scoring until the game hit garbage time.

“We were able to chase Howard off the line which really helped us,” Seton Hall head coach Kevin Willard said.

Though Marquette didn’t see its usual stars shine, Seton Hall’s leaders came through. Kevin Willard relied heavily on his top six guys with Ishmael Sanogo’s minutes limited by an injury. Five of the six Pirates who played more than 10 minutes scored in double digits, with Michael Nzei scoring eight. Khadeen Carrington led the scoring with 19 points, most of which came from his 11-for-11 performance at the free throw line. Delgado did it all, nearly snagging a triple double, scoring 12, grabbing 16 rebounds and dishing out nine assists. The offense was solid, but it was Seton Hall’s defense that won them the game.

“I think we had a six-minute stretch where they didn’t score in the second half,” Willard said. “Both teams were a little sloppy in the beginning of the second half, but we were really able to defend.”

Senior Luke Fischer came off the bench for Marquette with a point to prove. The 6-foot-11 big man swatted three shots away during his first stint on the court, sparking Marquette’s best run of play when they built an eight point lead in the first half. Though Fischer left the game with a shoulder injury in the second half he was able to return. He finished with seven points, six rebounds, four blocks, a steal and just one foul.

“They’re a tough matchup for us,” Wojciechowski said. “I’m not sure there’s a more physical team in our league and Delgado is just an absolute beast.”

Best line of the game

Andrew Rowsey: 23 points on 4-for-9 from 3-point range, three rebounds and two assists

Stat of the game

Seton Hall outscored Marquette 40-to-12 in the paint

Marquette will learn its NCAA Tournament fate Sunday on CBS at 4:30 Central Standard Time when the bracket is revealed.