Tournament chances up in air after loss to Seton Hall 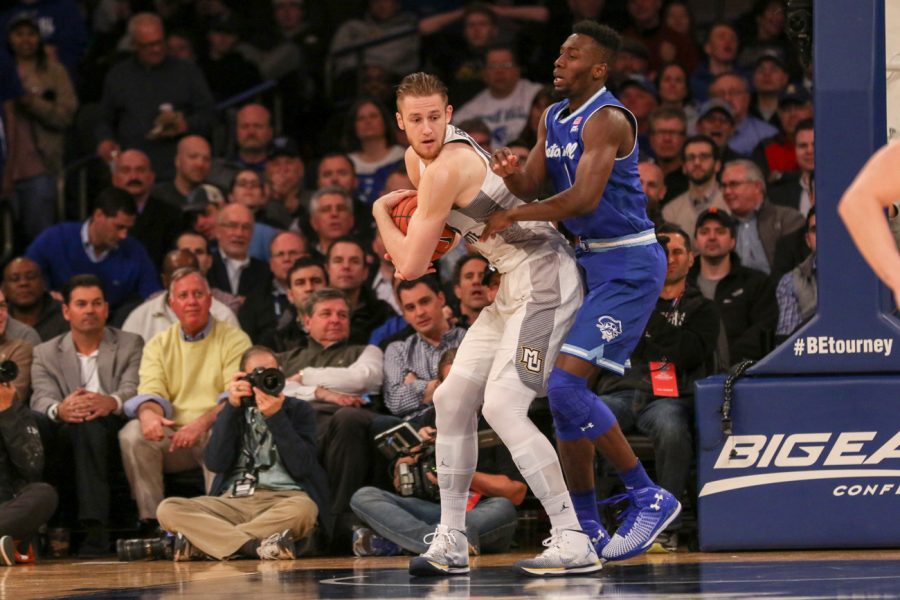 NEW YORK — Marquette ducked out of the BIG EAST Tournament early, turning in one of its worst shooting performances of the season in a 82-76 loss to Seton Hall in the quarterfinals Thursday.

Marquette, still on the NCAA Tournament bubble, has to nervously wait for Selection Sunday. Luckily for the Golden Eagles, few teams right behind them have a chance to improve their resume. Syracuse lost in the first round of the ACC Tournament to Miami, while Wake Forest lost to Virginia Tech Wednesday. Illinois State’s conference tournament is over, with the Redbirds falling to Wichita State in the Missouri Valley final.

Still, the question for fans until Sunday night will be, “Is Marquette in?”

“I think we are,” Luke Fischer said. “I think our resume is really good. … I think it’d be a shocker if we weren’t.”

“Nothing is guaranteed at this point,” guard Andrew Rowsey said. “In my opinion I believe we’ve done enough. We’ve proved ourselves multiple times.”

Marquette’s silver lining doesn’t end there, as Fischer, who left the game with about 13 minutes remaining, is not seriously injured. He got tangled with Seton Hall’s Rashed Anthony and fell to the ground holding the shoulder he had surgically repaired this summer. He checked back into the game four minutes later and said he is good to go going forward.

Seton Hall lived up to its reputation, destroying Marquette in the paint for 40 points. No one was more overpowering than forward Angel Delgado, who was an assist away from the second triple-double in BIG EAST Tournament history. He totaled 12 points, 16 rebounds and nine assists. He took advantage of Marquette doubling him with strong passes when they didn’t take the ball to the rack.

“I’m not sure there’s a more physical team in our league, and Delgado is an absolute beast,” head coach Steve Wojciechowski said. “To me he was the guy who dominated the game.”

“He’s first-team all-conference for a reason,” Fischer said. “We game-planned around him the whole time. … We tried to throw everything we could at him, double team in the block, late double two. He’s a really good player and he showed that tonight.”

While Seton Hall played to its strength, Marquette failed in theirs. The Golden Eagles hit only nine of their 24 3-point shots (38 percent) before hitting four in the final minute, despite getting plenty of good looks in the first half. The struggles weren’t limited to the outside, either. Marquette, which averages 49 percent from the field, shot 40 percent in this game.

The only players who found their stroke outside were Rowsey and Sam Hauser. Rowsey scored 23 points and shot 4-of-9 from 3-point range, while Hauser scored eight on 2-for-3 shooting.

The two teams were tied at 35 at the half despite Marquette’s shooting woes. Seton Hall took the lead with 15:44 remaining at the start of a Marquette scoring drought that lasted 4:49. The Pirates went on a 12-0 during that stretch. After failing to hit open shots, Marquette players began to force it and move away from Wojciechowski’s pass-friendly scheme.

“You have to trust the pass, even when shots aren’t falling,” Wojciechowski said. “Sometimes when shots aren’t going in, shots that you’re normally used to seeing go in, there’s a tendency to go like, ‘I gotta do it because we’re struggling.’ We’re not struggling. We’re just missing shots.”

Despite the late threes, Marquette wasn’t able to cut the lead late to less than six points. This is the fourth season in a row the Golden Eagles have been bounced from the conference tournament in the quarterfinals.

Selection Sunday announcements begin at 4:30 Central Standard Time Sunday and will be aired on CBS.