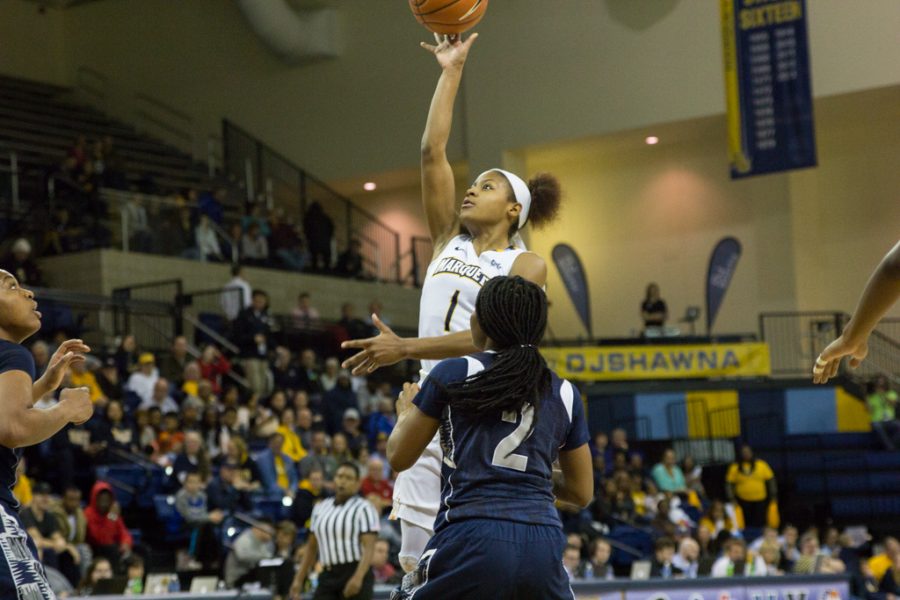 Marquette women’s basketball is advancing to their first BIG EAST Tournament semi-final since 2014 with an 80-66 victory over Georgetown on Sunday afternoon.

“How are team has progressed and how coachable they are in one year says a lot about them and I’m just really proud about the fact that they can follow a game plan much better than they did a year ago,” Marquette head coach Carolyn Kieger said. “I just can’t say enough about our balance. That is what I just talked to them in the locker room. It is nice to know every other possession someone else is stepping up. We don’t have to rely on one person to take the load in scoring. They just play so well together they share the basketball. They are fun to watch. They are fun to coach. I’m blessed.”

Allazia Blockton led the Golden Eagles with 20 points, but the offense was running through Danielle King, who finished with 14 points and 11 assists, which was a career high.

“I just attack more and that way it opens up for my teammates,” Danielle King said. “When I look to be a scorer it opens up for them because a lot of people collapse on me.”

Marquette also got in done on the defensive end of the floor by holding the Hoyas to just 34 percent shooting in the game.

Similar to Marquette and Georgetown’s last meeting, Georgetown was able to force Marquette to turn the ball over. This was more problematic for the Golden Eagles in the first quarter where they had five turnovers and the Hoyas capitalized by scoring nine points off of those turnovers.

“I give a lot of credit to Georgetown. They are a great coached team and they are really scrappy,” Kieger said. “They play hard, so they get their hands on a lot of loose balls. They get down low and they do a phenomenal job being aggressive and being tough. For us we knew that was going to happen. We knew that was going to be part of their game plan. We weathered the storm a little bit. Obviously, that is something we will look at in the film going into Creighton.”

The Golden Eagle’s turnovers kept the game competitive and it looked as if things were going to get worse for Marquette when Natisha Hiedeman went landed awkwardly on her ankle after going up for a layup midway through the first quarter. She limped off the court, in what appeared to be significant pain, and headed straight to the locker room.

With 2:54 remaining in the quarter she checked back into the game to a standing ovation and began hitting shots. In back-to-back-to-back plays she hit two three-pointers and then scored again on a fast break layup. Hiedeman would finish the half with 13 points.

“I knew I was coming back regardless,” Hiedeman said.

“I’m so proud of our team’s toughness today. Obviously, it was started with Natishia Hiedeman,” Kieger said. “For her to roll her ankle and come back there and just play for her team. Postseason play, she set the example for us.”

Marquette headed into halftime up 38-27.

Early in the third quarter Georgetown used a weak offensive start from Marquette to cut the lead down to four. Marquette would eventually find their stroke and by the end of the quarter they were back in control with a 58-46 advantage.

They would hold throughout the fourth quarter to take home the 80-66 victory.

Marquette will take on Creighton Monday in the semi-finals at the Al McGuire Center.