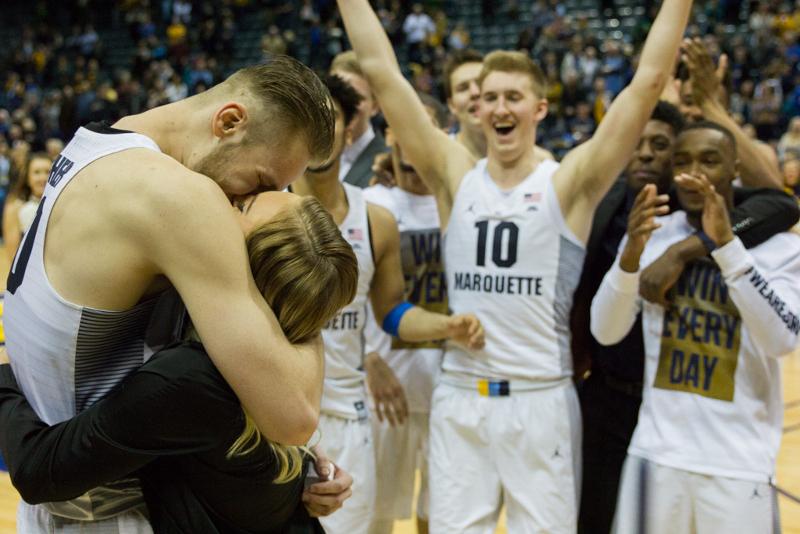 Marquette celebrated senior day in their final home game of the season. The Golden Eagles’ three seniors combined for 45 points. Jajuan Johnson led the way by scoring 20 points for the third time this season, Luke Fischer returned to the starting lineup by adding 13 points and Katin Reinhardt came up with 12.

“The fact that we got really good contributions from three guys who won’t ever play here at the Bradley Center in a Marquette uniform again is certainly gratifying,” head coach Steve Wojciechowski said. “Those three guys were a big part of the win.”

His impact doesn’t always show up on the box score, but Sam Hauser has become one of Marquette’s most well-rounded and consistent players. The freshman scored 11 points, grabbed a co-team-high seven rebounds, added two assists, two blocks, a steal and no turnovers. In addition to a nice plump box score, Hauser was the glue holding Marquette’s defense together. He was sharp in his rotations and he altered a number of shots, consistently forcing Creighton misses.

“Sam’s one of the best freshmen in the league,” Wojciechowski said. “I don’t know if he’ll be recognized as such in terms of all-league rookie, but I thank my lucky stars every day he’s on my team. The kid’s a winner. I’ve said it once, I’ve said it a thousand times, he makes a lot of plays on the basketball court that put your team in a better position to win the game.”

Entering the game, sophomore guard Haanif Cheatham led Marquette in minutes. He had started every game of his career until National Marquette Day two weeks ago, but Saturday afternoon he played a season-low three minutes.

“Whenever we get 20 assists and low turnovers, it’s going to be hard for anyone to beat us,” Fischer said.

After his team’s triumphant 91-83 victory against Creighton, Marquette’s all-time leader in field goal percentage grabbed the arena microphone from his coach. He thanked the fans for their support, but called out one fan in particular who supported him the most. The special fan was Fischer’s longtime girlfriend Payton Brock. Then he got down on one knee and asked her to marry him, and he received a resounding yes.

“Honestly I kind of just decided yesterday,” Fischer said of his plan to propose. “Most of her family’s in town and I had one chance to talk to her dad and so I did. My teammates have been teasing me about it for a while about doing it tonight and it actually worked out to be a perfect time.”

He said he would only do it if they won.

For the second time this season, Marquette approached the school record for most 3-pointers made in a single game but failed to tie the record. The Golden Eagles made their 14th 3-point shot of the game with 7:43 to play, but they were unable to make another one, falling short of the program record of 15.

“It’s just a matter of time before they hit you with three 3-point shots in five possessions somewhere, it’s just what they do,” Creighton head coach Greg McDermott said.

With the victory Marquette moves to 19-11 on the season and 10-8 in conference play. With eight top-50 RPI wins including a victory over Villanova, and sweeps of Creighton and Xavier, the Golden Eagles have an undeniable tournament resume. Marquette will kick off BIG EAST Tournament play Thursday as the No. 4 seed facing No. 5 seed Seton Hall. Rather than playing for their NCAA Tournament life in New York, the Golden Eagles will be playing to improve their seeding.

“Our job is to continue to get better in our next game and our focus is on the BIG EAST Tournament,” Wojciechowski said. “I’m proud of my team’s accomplishments so far. Whether or not we make the NCAA Tournament is in the hands of other people. Our job is to win the next game.”

Best line of the night

Stat of the game

Marquette was 14-for-28 from 3-point range, pushing their percentage from deep to 43 percent for the season, best in the nation.

Marquette will play Seton Hall in the quarterfinals of the BIG EAST Tournament at 1:30 p.m. CT at Madison Square Garden Thursday afternoon.