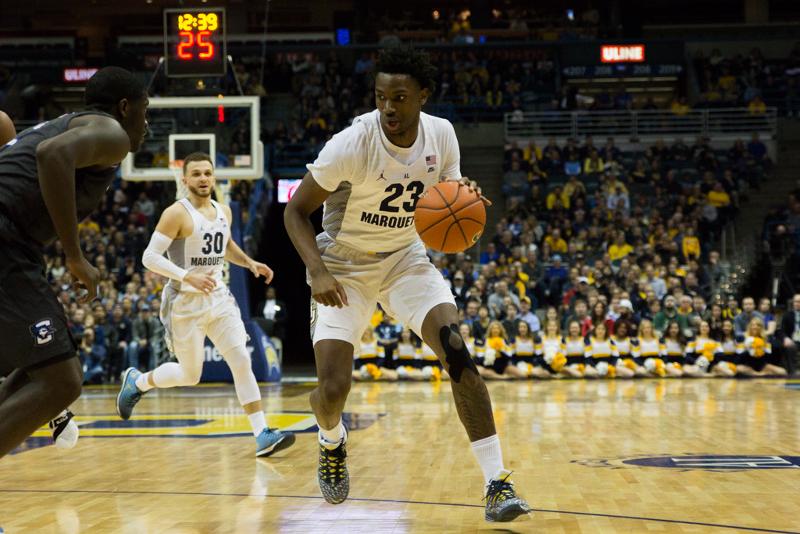 Jajuan Johnson scored 20 goals for the Golden Eagles in their win against Creighton.

The victory locks up the fourth seed for the Golden Eagles in next week’s BIG EAST Tournament. Marquette will play Seton Hall Thursday at 1:30 CT at Madison Square Garden.

Marquette responded well down the stretch after stumbling against Providence and St. John’s in late January and February. The Golden Eagles closed out the regular season by winning four of its final five games, including three against teams projected to make the NCAA Tournament. The 10-8 conference record marks the first time Marquette has recorded double-digit conference wins since the 2012-’13 season.

“For the past month or two we’ve been saying how 10 is our magic number,” Luke Fischer said. “It’s been an up and down road, that’s for sure.”

The game was officially senior night, but early on it felt like it was solely Jajuan Johnson’s night. He scored the first eight points of the game and put up a monster stat line in the first half, scoring 18 points, grabbing four rebounds, dishing out three assists and snagging two steals.

“I thought he had a very aggressive mindset to start the game,” Marquette head coach Steve Wojciechowski said. “I could sense in JJ’s practice. I could sense it in his face, because he’s a guy that you can kind of read, just by looking from him, that he was really ready to play. Our team needed him to be ready to play and he delivered.”

He even found his stroke from 3-point range despite shooting 34 percent on the season. He made four of his six 3-point attempts, including one from the BMO Harris Bradley Center logo.

“I thought he was open,” Wojciechowski said. “When JJ has his feet set he’s a good shooter. When he’s taking high quality shots he can shoot a good percentage.”

“JJ’s such a dynamic player,” Fischer said. “Once he gets his shot going, then guys are starting to close down hard on him. He’s able to get to the basket.”

But Johnson was used sparingly in the second half, playing only six minutes. He was benched after missing a breakaway dunk that would have given Marquette a 17-point lead.

That’s when Markus Howard took over, shooting 100 percent (5-for-5) in the second half. He nearly recorded a triple double in the game, scoring 18 points to go along with seven rebounds and nine assists.

After going into halftime with a 52-42 lead, the Golden Eagles held the Bluejays at a double-digit distance for the first five minutes of the second half. Creighton made its biggest run after Johnson’s missed dunk, scoring seven straight points in a bit over a minute. Marquette responded well to pressure, going on a eight-point run of its own with a layup from Fischer and a pair of threes from Katin Reinhardt and Duane Wilson.

Creighton wasn’t able to get within 10 points again until the final two minutes. Although Marquette missed three times at the start of 1-and-1 free throw opportunities, the Bluejays weren’t able to cut the lead any smaller than six points. Free throws from Andrew Rowsey and Howard clinched the victory.

“That’s for other people to decide,” Wojciechowski said. “Our job is to continue to get better. Our focus is on the BIG EAST Tournament.”