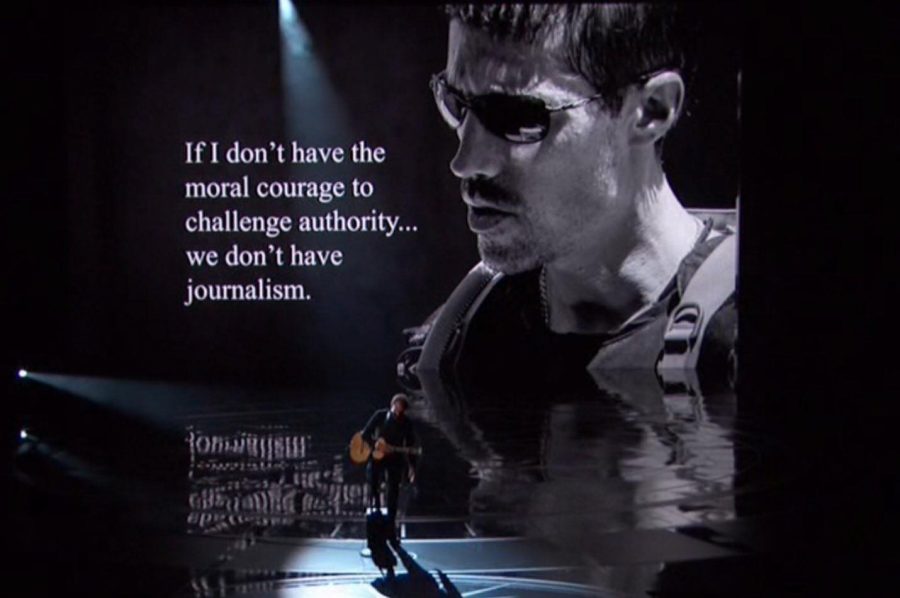 James Foley was honored during the Oscars as Sting performed "The Empty Chair," nominated for best soundtrack, from "Jim: The James Foley Story" documentary. Photo via ABC

The singer sang his Oscar-nominated song, “The Empty Chair,” from the documentary “Jim: The James Foley Story.” The song lost the Oscar for best original song to “La La Land” and its song “City of Stars.”

Thomas Durkin, a longtime friend of Foley and Marquette graduate, said he and Foley’s family knew the song had been nominated and Sting would be performing, but they had no idea how it would be done.

As the performance came to an end, an image of Foley flashed on the screen with his quote, “If I don’t have the moral courage to challenge authority … we don’t have journalism.”

“I don’t think they could have done it any better. I was blown away,” Durkin said. “The simplicity of the song with the background with Jim at the end and seeing the large image of him with the quote. The song captures Jim and that quote is what he stood for—having physical courage and moral courage to actually be a good journalist and have the truth.”

The quote rings true to not only how Foley lived his life, but also sheds light on current journalists, especially those from various news organizations that were banned from an informal White House Press Briefing by President Donald Trump.

“At a time when the value of journalism has been questioned, James’ example—and his words that appeared on screen at the end of the performance—are as relevant as ever,” Chris Jenkins, associate director of communication, said.

Foley graduated from Marquette in 1996 with a bachelor’s in history and went on to Northwestern’s Medill School of Journalism in 2006.

He covered war in Syria and Libya, entered war zones and was captured for 44 days in 2011, where he was held in a 12 by 15 foot cell. Five months after being released, he returned back to his public service journalism. Then, in 2012, ISIS captured Foley. After two years, his captors publicly executed him at the age of 40.

“As a university, we were heartened to see the Oscars pay tribute to our beloved alumnus, James Foley,” Jenkins said. “Through his life and his work, James embodied so many of the values that we seek to encourage in our students.”

Durkin said watching the remembrance performance was surreal. So was watching and being featured in the documentary, inducting Foley into the Milwaukee Press Club Hall of Fame and countless other things.

“It’s hard to process it in the moment because you want your friend back here sitting with you, not being honored because he was killed by ISIS” Durkin said. “It was very surreal to see it and it felt very, very right.”

If there is one takeaway Durkin wishes people would takeaway from the Oscar performance and Foley’s documentary, it’s understanding.

“I hope more people take the time to find out about Jim and not just about Jim, but all of these journalists and the dangers they put themselves in so that we can know the truth.”