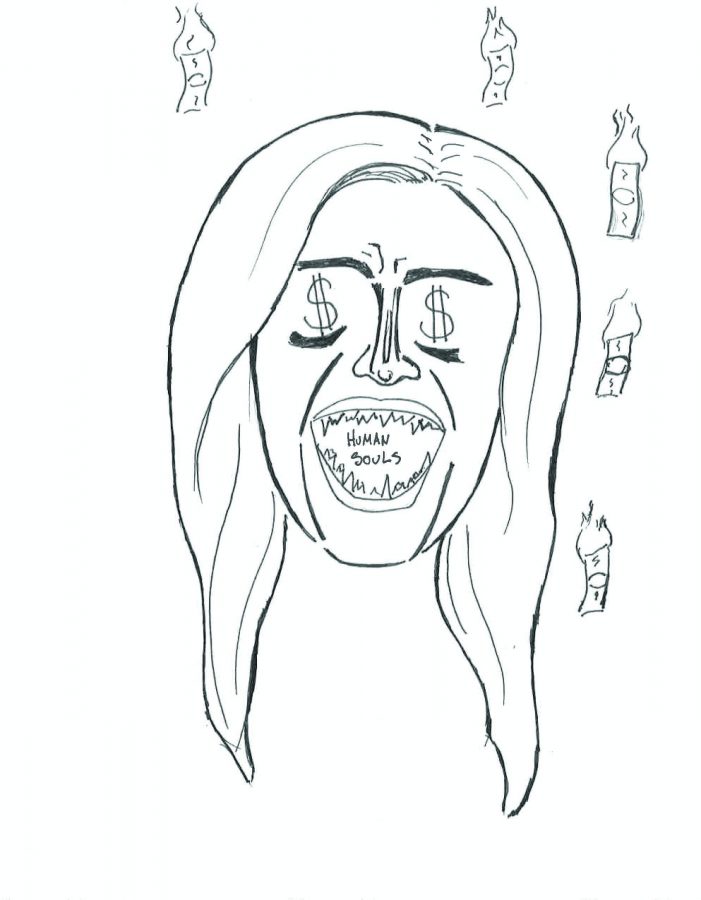 Political commentary is a soul-sucking enterprise. Cartoon of Tomi Lahren by Morgan Hughes

The first thing I was taught as a bright-eyed, optimistic, Social Justice Warrior, 18-year-old journalism student was that media are businesses. Forget everything you thought you understood about the press lest your time spent learning this craft be misguided, was the general message.

It was not that media are evil, not that they are corrupt or deceptive — though those are terms often associated with business, they are not synonymous. The lesson was not to distrust media, but to be wary of marketing techniques and not to confuse the two.

It is with this skepticism I approach political commentary shows like TheBlaze’s “Tomi” with Tomi Lahren, or MSNBC’s “The Rachel Maddow Show” or Comedy Central’s “The Daily Show.”

I’ve prickled during Tomi Lahren’s egregious comparison of Black Lives Matter to the KKK, and I’ve nodded along as Trevor Noah condemns the actions of the Trump administration. But regardless of my own reactions to individual commentators, I can’t with good conscience acknowledge these shows as anything more than tabloid journalism.

The point of these shows is to confirm the beliefs of those who agree and enrage those who do not. The business model is essentially to keep those who agree coming back and frustrate those who don’t to the point where they have to show all of their friends in order to alleviate their anger. They don’t serve a purpose other than to pick apart those on the other side. They are divisive in an already distanced political climate.

The preachy monologues scapegoat blame. It’s the ultimate, “it’s not me, it’s you.” We don’t need to find a solution because it’s not our fault, right?

Most dangerous of all, though, is that these shows are purposefully emotive. That some of the information they provide is factual is irrelevant because of how irresponsibly that information is presented. Anger clouds judgement. That’s why we get flustered during debate or inconsolable in the face of betrayal. Sure, emotive rhetoric has a place, but not in news media, at least not in fair news media. These shows take advantage of us. They play on our sympathies and our values.

The reason Lahren and Noah can be friends outside of their respective talk show platforms is they know it’s an act. Sure, they believe what they’re saying, but not to the degree of urgency they pretend to.

Stephen King writes, “What do you do when you can’t use anger to fall back on? You admit the truth.” And I think that simplifies my point better than anything. When we stop blaming “them,” when we stop acting like we’ve been personally victimized, when we get over ourselves and look at things rationally rather than through the lens of blame, then maybe solutions to these problems we keep avoiding will present themselves.

I’ve written about my contempt for partisan politics a million times, I’m sure. It’s a cancer on a could-be intelligent community. These shows only amplify the spread of the disease.

Political commentary is not inherently useless. It can be a useful tool in educating a confused public, but only if the goal is explicitly to inform.