UNGER: Late-game offensive woes a cause for concern 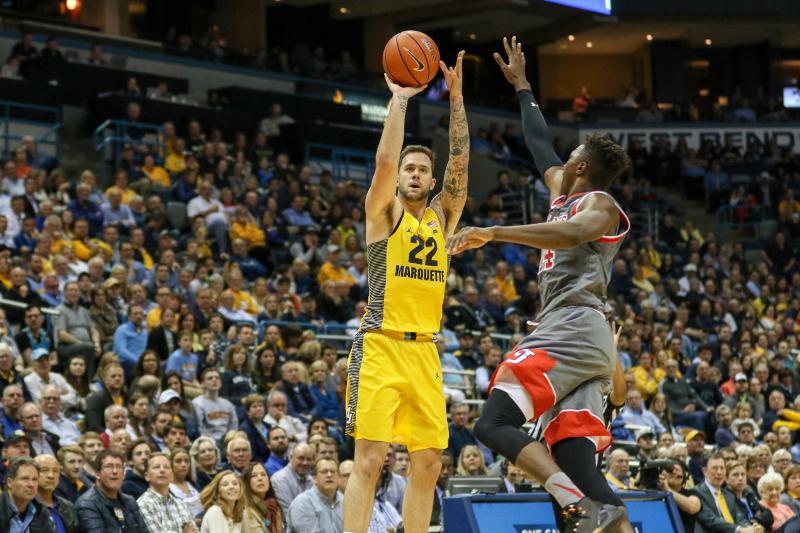 Katin Reinhardt has been at the center of Marquette's late offensive woes, missing shots against Providence in both losses.

Thus it would make sense to blame the Golden Eagles porous defense (234th in the nation in defensive effective field goal percentage) for its four unfathomable second half collapses this season where Marquette had at least an 85 percent chance of winning at one point.

However, the offense has also been dismal in the late stages of each of Marquette’s blown chances at tournament-solidifying wins. The most recent example of this is, of course, the loss at Providence this past Saturday where the Golden Eagles blew a 12-point advantage with 7:20 to go. After going 20-for-38 from the field and 11-for-18 from three through the first 32:40 of the game, Marquette proceeded to miss its next eight shots while turning it over four times.

This is not the first example of the offense disappearing when it matters most. Against Pittsburgh, the Golden Eagles recorded just 10 points in the final 8:58 of the game. At that point, the Golden Eagles led by three, but poor shooting (3-of-12 down the stretch) turned a once 15-point lead into three-point loss.

Marquette’s offense got sloppy in its first BIG EAST Conference game as well. After blowing an early 10-point lead, the Golden Eagles were able to claw back to retake a two-point advantage with 5:12 remaining the contest. However, four turnovers and just six points in the closing stages of the game started conference play off on a sour note for Marquette.

The offense also stalled for a 10-minute span against Butler. Although the Golden Eagles held an 18-point advantage with 19:17 remaining, their offense recorded just 10 points during the next nine-minute stretch. Unfortunately for Marquette, its defense is nowhere near good enough to support cold shooting stretches of this magnitude, and the Golden Eagles went on to lose another head-scratcher.

It is quite clear that Marquette’s offense is a lethal weapon, capable of putting bunches of points in the blink of an eye. Yet it relies on a hand-off offense, 3-point shooting and a quick tempo (88th in the nation). This has led to some ugly late-game offensive possessions where the Golden Eagles churn the shot clock, only to throw up a deeply contested 3-point attempt.

Although it’s easy to pin Marquette’s late game meltdowns on its usually poor defense, the nature of the offense has also made closing out large leads a problem. With a defense that ranks 137th in the country in adjusted efficiency and a front court that ranks in the bottom half of the conference in rebounding, the Golden Eagles will almost always have to rely on the offense to close the deal. And as Saturday’s loss and previous blown-leads show, that’s never a sure bet.