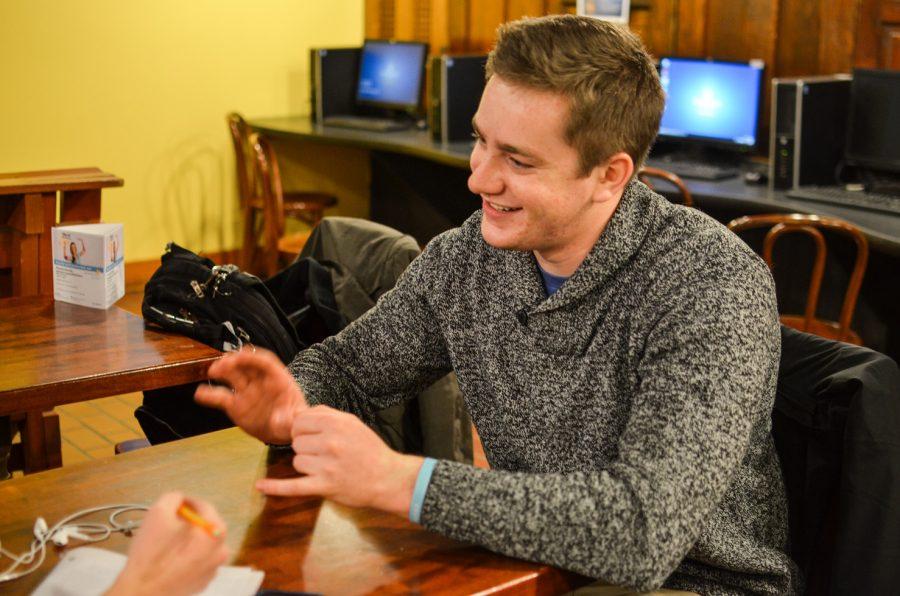 As he walked down the street, Jack Toner spotted a homeless man asking for $12. He was suffering from burns and refusing to go to the hospital.

That’s when Project Aceso was born.

Toner, a sophomore in the College of Business Administration, and his team members pack bags filled with a toothbrush, toothpaste, socks, Band-Aids, gauze pads, a gauze roll, triple antibiotic ointments and alcohol wipes to help fight infection and disease. The project was named after Aceso, the Greek goddess of healing.

Toner has made a habit of carrying a Project Aceso bag in his backpack.

“Whenever I see a homeless person on the street, I asked them if they need socks, a toothbrush or a Band-Aid,” he said. “If they say yes, I hand them a bag.”

Homeless people are more susceptible to a variety of infections, including skin infections from open wounds. Three Milwaukee homeless shelters have agreed to take the bags and distribute them to their patrons; the Milwaukee Rescue Mission, Repairers of the Breach and St. Ben’s Clinic.

Sophie Temple-Wood, a sophomore in the College of Nursing, acts as the team’s medical consultant and helped decide which medical supplies to include.

“When wounds go untreated, especially (with) homeless people because they don’t want to seek help because it’s expensive, they can have a lot of problems that go along with that,” Temple-Wood said. “They might end up in the hospital anyways in a worse condition.”

The first set of bags were funded through a GoFundMe page, and Toner’s own expense. He orders most of the supplies from Amazon. However, he said some of the supplies were donated, such as toothbrushes and toothpaste, from the Marquette Dental School.

Right now, the project is entirely based on donations. Toner said he hopes to move toward selling the bags in order to fund the supplies.

“In an ideal world, we’ll find data showing that these bags reduce the number of homeless people that go to hospitals,” he said. “Then, we could sell them to hospitals. The other area we’re thinking about is selling them to small mom and pop shops that might give (them) away to customers.”

The Project Aceso team also consists of seven members of the Commons, a program that connects Wisconsin college students to startup projects. Jonathan Jean-Baptiste, a sophomore in the College of Arts & Sciences, was accepted into the Commons and wanted to join Project Aceso after hearing Toner pitch the idea to members.

“I’m a biology and sociology major, so those two disciplines really fit together perfectly in this particular project,” Jean-Baptiste said. “This project obviously deals with the health of homeless individuals, but it also taps into the bigger problems they face, which is a big part of sociology.”

Toner said while the homeless people receiving the bags are often very thankful, it can sometimes be hard for them to see the immediate value because they don’t contain food.

“Over time, we hope to try to get coupons or vouchers in there,” Toner said. “I hope then that there will be more of an immediate reaction.”

In the future, the project could also expand beyond beyond Milwaukee.

“The ideal scenario would be that it’s used in disaster relief,” Toner said. “I do hope to make trips to countries in need. For now, we’re just going to start in Milwaukee and make sure it works.”