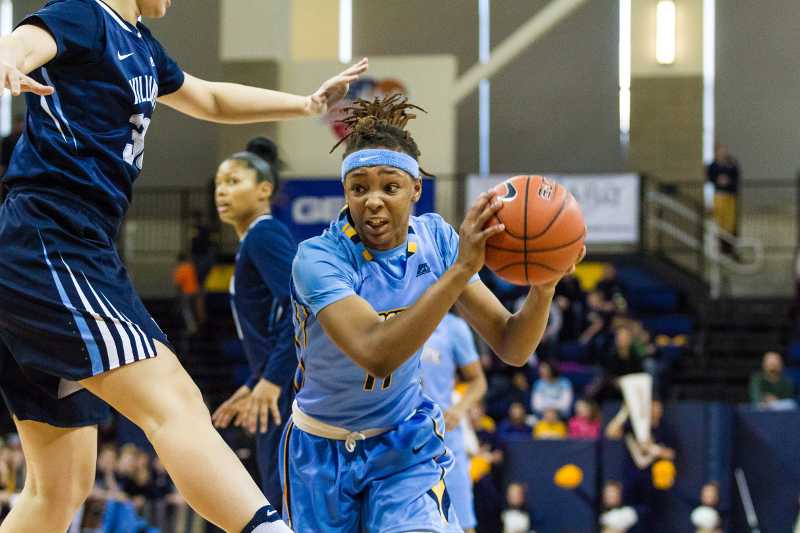 Allazia Blockton led Marquette with 16 points in a victory against Villanova Sunday.

The Marquette women’s basketball team ended their season on a winning note by beating Villanova 62-53 Sunday.

It was Marquette’s fifth win in a row as it gears up for the BIG EAST Tournament next weekend. Prior to Sunday’s game, the Golden Eagles secured the third seed in the tournament, while the Wildcats were locked in at the four seed.

“It gives us a lot of momentum going into this first round game against Georgetown. I think our team is very confident right now,” head coach Carolyn Kieger said. “I think the best thing about us though is we are playing for each other. Our chemistry is fantastic. We just really want this. We want this for McKayla (Yentz). We want this for the whole team.”

For the second game in a row, Marquette struggled shooting from the field, as the Golden Eagles shot only 40 percent, but once again they had a balanced offensive attack with four players scoring in double digits.

“Georgetown and Villanova play very different styles,” Kieger said. :”Tonight, Villanova wants to play their pace and for us we didn’t shoot fantastically, but it’s nice to know we can play the way we play and still come out with two W’s.”

Further helping Marquette was the fact that Villanova shot only 30 percent from the field.

Sunday was also senior day for Yentz, Marquette’s lone senior. The team honored her with a post-game ceremony, a video and Kieger told the crowd at the Al that the postseason was going to be dedicated to Yentz.

“McKayla is, and I said this in my post-game speech, she is everything that is right about college athletics. She is the most loyal player I have ever coached in my life. I’ve never really been more proud of a player, as a teammate or as a coach,” Kieger said. “For her to have this special day where it’s just honoring her is really special and she really deserves this day.”

Following the tip, there was a clear difference in each team’s style of play. Marquette likes to push the ball on offense, while Villanova likes to play slow on offense and set up each play.

Marquette escaped the first half up 37-26, despite shooting just 41 percent from the field.

Marquette took a 48-44 lead into the fourth quarter and the Golden Eagles wouldn’t surrendered that lead taking the 62-53 win.

Marquette is back in action on Sunday when they take on Georgetown in the BIG EAST Tournament at the Al McGuire Center.