Behind the Badge: Officer Gary Bray 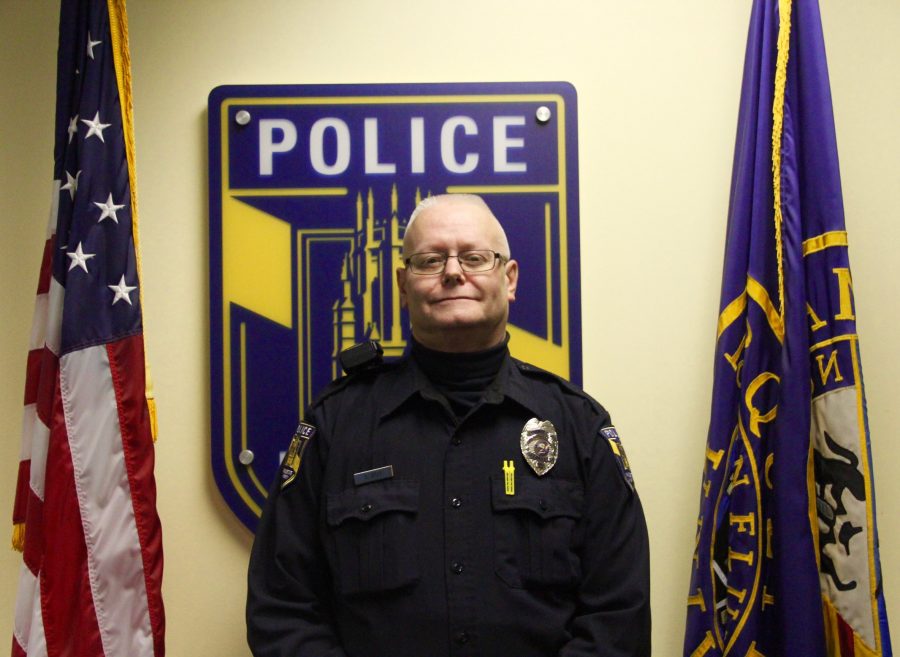 Officer Gary Bray, a Milwaukee native, made the transition to work at the MUPD eight years ago. Photo provided by Clara Janzen clara.janzen@marquette.edu

It is no secret homelessness is prevalent in the area surrounding Marquette, and around the whole city. The Marquette University Police Department is making strides to change the way it deals with homelessness in the area.

“We are trying to become part of the community,” Captain Jeff Kranz said on how MUPD is dealing with the high volume of homeless people in the area. “We’re trying not to make homelessness a crime. Writing someone with no money a ticket is pointless.”

MUPD wants to police in a different way. “It’s easy to just throw someone in jail and say problem solved, but that’s only a short term solution,” Kranz said.

“I have conversations where I’m like, ‘I see you out here every day, let’s get to know you.’ What can I do to try to make a win-win situation for everybody?” Bray said.

One of the main ways HOT has changed MUPD is by teaching officers to find alternative solutions to ticketing and arresting homeless people.

“Last summer, we arrested three people around the same time that were stealing items, and it was all hygiene products; and, as we were writing the citations, we asked them why, and they said, ‘Oh, we’re just short on this. Shampoo, razors, this or that.’ So I thought, instead of you guys stealing it, we have some hygiene products. Just come in and ask us,” Bray said.

Since then, the MUPD patrol cars have started carrying hygiene products, as well as other basic items like clothing to give out when they see people in need. By doing this, MUPD is providing an alternative interaction between those in need and the police instead of the interaction they may otherwise have had, stealing and getting cited.

Looking for a more rewarding job, Bray, a Milwaukee native, made the transition to work at the MUPD eight years ago. This move came after working 13 years in the Milwaukee County Sheriff’s Department, mostly at the jail. Bray said he needed to do something different. He liked working with people and knew he wanted to help them. He saw an option to do that at Marquette.

Bray works the day shift (6am-6pm) doing patrols, but his work extends past the limits of a 12 hour period.

In his off hours, besides listening to ’80s heavy metal and reading, Bray spends his own time working beyond HOT, as he coordinates with and actively volunteers at many causes targeted at helping the homeless around the city. Bray, a coast guard member himself, loves to work at the Milwaukee homeless veterans initiative.

“I’m glad the department understands. You know we have Marquette values, and they give me the time to break away from regular patrol to work on these side projects,” he said.

He likes to get to know people personally, and finds it easier to help people once he gets to know them and understand their problems.

He describes himself as the middleman, receiving and distributing donations. Bray has done this with the help of people at Gesu parishes, and has created ties between the MUPD, Gesu and the community working to help the homeless.

“I want to help people directly, not just hearing about it, so you can empathize with what they went through and what it took to change their lives,” he said.

A partnership with Gesu

Peg Flahive, the director of human concerns at Gesu parishes, said Bray and the HOT team have been very helpful in aiding their mission. “It’s a great partnership between Gesu and the MUPD,” she said.

Parishioners donate a variety of items to Gesu, and Bray takes some of it to go distribute. He takes some to shelters and some to keep in the lobby of the police department.

Another way Bray is working with Gesu is passing around pieces of paper with lists of resources for those in need compiled by individuals at Gesu.

“It’s nice that we can hand that out for anyone who’s not familiar with those services,” he said.

Bray said he wants to help get the word out so people know all of their options. “If we can deal with (people) by advising or pointing them in a different direction, I’m happy with that,” he said.

A group that calls themselves the “city meal ministers” meets once a month, and they plan different meal sites across the city, as well as discuss meal security and other concerns.

Last summer, some MUPD officers gave training to the meal ministers on diffusing conflict through conversation. For people like herself that work with meal planning, Flahive said it was very helpful and she and others were grateful for the time the officers took to help them. “They don’t have to do this kind of stuff.”

Gesu has held a variety of other events and initiatives MUPD officers have attended on and off the clock. Flahive said, to her, that shows the officers’ commitment to be active and involved in the surrounding communities.

MUPD has an “attitude of respect and passion coupled with the work that needs to be done,” Flahive said.