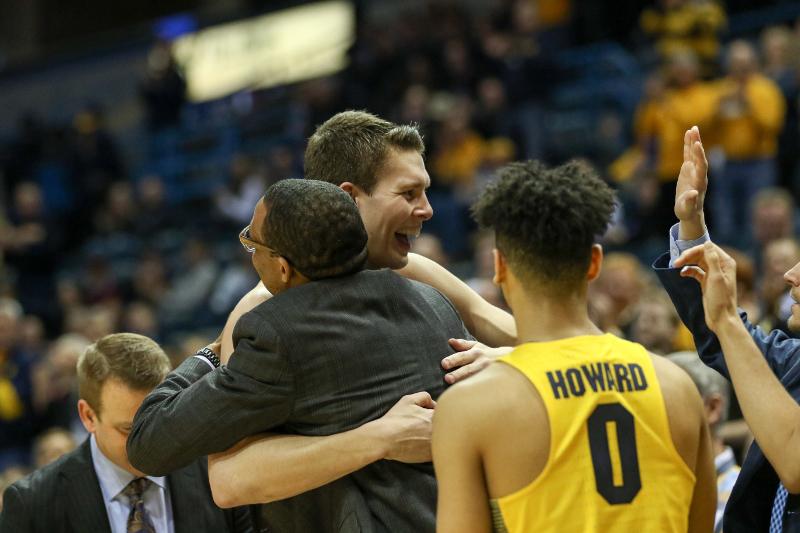 Men’s basketball, still teetering on the NCAA Tournament bubble, took care of business against a St. John’s team that gave the Golden Eagles trouble in their first match-up with a 93-71 victory Tuesday night.

The offense ran efficiently, fueled by plenty of ball movement to create space outside. Marquette’s threes were falling. Fitting for the game, the team broke the program record for 3-pointers made in a season. Hauser scored a team-leading 19 points on 5-for-8 from long range, Rowsey went 3-for-8 from three and Katin Reinhardt, Markus Howard and Haanif Cheatham all shot 50 percent or better from beyond the arc.

But the most unexpected producer on the offensive side of the ball was center Matt Heldt, who moved around the basket for tip-ins and layups with ease. He scored a career high 15 points on 6-for-6 shooting and recorded his first career double-double with 10 rebounds in his second straight start.

“I really didn’t do anything different,” Heldt said. “I’m a routine guy. Every game I like to prepare the same way. I played some more minutes so that probably helped me get more points and rebounds … I just did the job the best I could.”

“How could you not be proud of him,” head coach Steve Wojciechowski said. “We made a decision a couple of games ago to shift things up. You don’t know how guys are going to respond. His response has been exactly what you would want.”

He received a standing ovation when he came off the court in the final five minutes, and when Luke Fischer picked up his fourth foul on the ensuing possession, “We want Heldt” chants echoed from the generously half full student section.

“Hopefully kids in my class don’t start doing that while the teacher’s teaching so I can’t focus,” Heldt said.

Throughout the year, Heldt had already taken enormous strides as a defensive player, earning him twice as many minutes a game this year than he received as a freshman.

“He’s taken his game to the next level,” Wojciechowski said. “His ball screen defense, his protection of the rim, his willingness to give up his body, his ability rebound in traffic have all been big improvements in our defense.”

Heldt said much of his progress can be attributed to his added strength, which is obvious looking at how much slimmer and muscular he looks now compared to when he arrived on campus.

“A huge part of college basketball people don’t really see is the weight room,” Heldt said. “I love getting in the weight room and getting extra work.”

Marquette went to the locker room up 52-37 thanks to Reinhardt scoring ten straight points and Rowsey catching another player jumping with a pump fake in the final five minutes.

Arguably, the most dynamic Golden Eagle in the second half was Jajuan Johnson, who Wojciechowski benched in the team’s previous game against Xavier. He scored nine of his 11 points in the second frame, including a thunderous dunk while getting fouled by Tariq Owens.

The Golden Eagles maintained a double-digit lead for a majority of the game, a far cry from Marquette’s poor performance in an 86-72 loss against the Red Storm in New York earlier this month.

“I think we just came ready to play,” Hauser said. “In New York, I don’t think we were ready. Our competitive spirit wasn’t there. This game, we refocused and took that last game to heart. We weren’t going to let that happen again.”

“The game in New York left a bad taste in our mouth,” Heldt said. “Just because we won a game before this, we can’t be satisfied. They really beat us bad in New York so we had to get them back in this game.”

Marquette’s attention turns to Providence, another team that beat the Golden Eagles earlier this season. The Friars (16-11, 6-8) have two straight impressive victories against Butler and Xavier and pulled out a 79-78 win on Marquette’s home court Jan. 28.