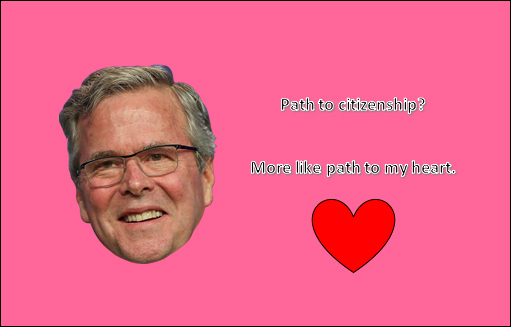 Roses are red, violets are blue, I love Jeb(!) Bush and so should you.

John Ellis Bush: Jeb! to friends, family and the American populous, son of George H.W. Bush and younger brother of George W. Bush, and rightful 45th president of the United States of America.

I’m not a Florida loyalist or a charter school advocate; I’m an Obama foreign policy apologist and a defender of same-sex marriage. In every election I’ve been old enough to participate in, I’ve voted along Democratic Party lines and have even been called a “liberal talking parrot” by a very astute Facebook commenter. So, why the Jeb love letter?

Certainly some of my feelings could be described as pity. As in the “Please Clap” incident, or the beautiful-though-misguided #Jebunfiltered. But clueless sincerity aside, I genuinely believe that Jeb Bush would have made an excellent president, and had the political climate during the recent election been more tempered, I think we would have seen a Bush 3.0 in the Oval Office.

On many things, I wholeheartedly disagree with Jeb, but I admire his steadfastness in his convictions. He does not often fold under Republican pressures. He is, by and large, a representative of the GOP status quo, but is also known to break that mold when it challenges his personal ideologies.

A short list of these inconsistencies with his party include supporting a path to citizenship, acknowledgment of climate change, approval of abortion in instances where the pregnancy would put the mother’s life in danger and in instances of rape or incest, and support of the Common Core (which Republicans rightfully oppose, but still).

These stances don’t make him a good or bad person. His moral aptitude is irrelevant (though I would also argue that the dude’s got character to spare). What makes Jeb an admirable politician is his ability to work past partisan responsibility.

The politicians we should revere are not the ones who champion all of our personal beliefs, but rather those who embody a true representative democracy – that is to say, those whose platforms best represent the most diffuse citizenry.

At the same time, I would hope most citizens would align their views similarly, in a way that may break with party divisions but is ultimately a more precise representation of the middle.

I feel necessitated to abandon my stance and agree. I do agree. A wall is a bad idea, persecuting Muslims is a violation of human rights and extolling a man who supports sexual assault is not only embarrassing but dangerous, but despite how abhorrent I find our current executive branch, I still support middle-of-the-road voting and practices that encourage compromise.

“(Political parties) are likely in the course of time and things, to become potent engines, by which cunning, ambitious and unprincipled men will be enabled to subvert the power of the people and to usurp for themselves the reins of government.” – George Washington, First President of the United States.

“A house divided against itself cannot stand.” – Abraham Lincoln, 16th President of the United States.