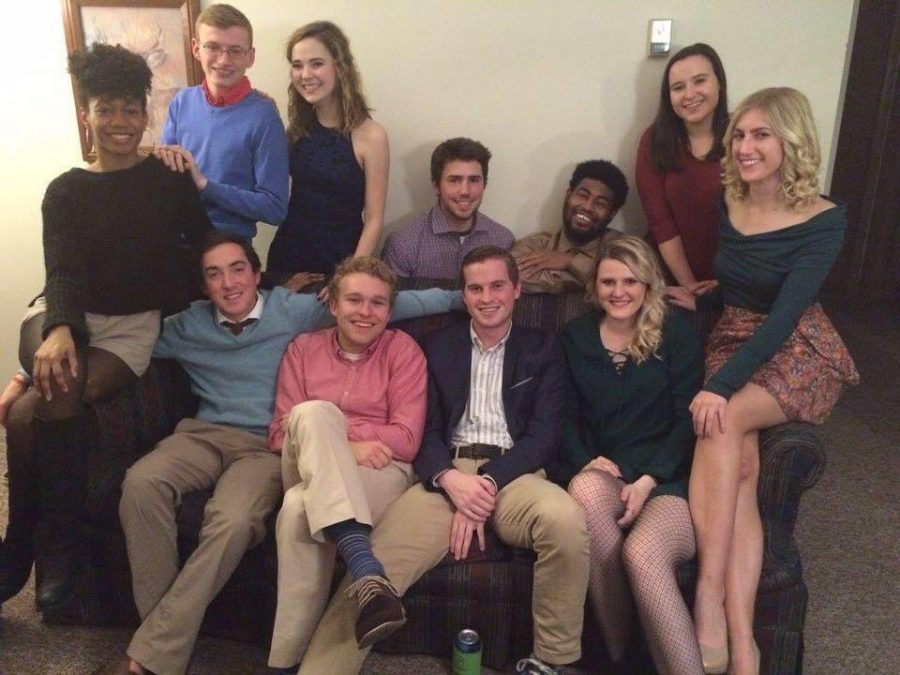 Danny Lang, a sophomore in the College of Arts & Sciences, doesn’t remember the last time he left practice without being in pain. But this isn’t practice for a sport – Lang is a member of the Room 013 Refugees, Marquette’s improv team.

“I don’t think I’ve ever gone a whole practice or show without laughing so hard that I was in pain,” Lang said.

Lang said that this was one of their bigger crowds. Fugee shows can draw crowds of up to 300 people.

“There were people sitting in the aisles because there weren’t enough seats,” he said.

Some of the Fugees have been doing improv for years. Others, however, didn’t start until after arriving at Marquette.

Ryan Lavelle, a senior in the College Communication had performed improv in high school theatre classes before he joined the Fugees.

“I got on campus my sophomore year and tried out and I didn’t make it, but I tried out again next year and went to all the workshops,” he said.

His hard work paid off, as this is his second year on the team.

Lavelle said his favorite aspect of being on the team is the people he performs with. The audience is secondary.

“You’ve done improv with these kids so much that you’re trying to make them laugh during scenes,” he said. “Sometimes the audience laughs are going to feel cheaper than a genuine laugh you give people in the group.”

Some of the group members are involved with other forms of comedy as well.

Lavelle said he writes some comedy material. He prefers writing and filming skits, and leaves stand-up to others. He said he’d love to try stand-up, but it’s hard to think of ideas and that is why he prefers improv.

“You just go up there and say the first thing that comes to your head. I really think improv is just your core comedic sense coming out of you. You’re rolling along with what your gut says is the funniest thing,” Lavelle said.

Lang, however, has had no trouble converting his sense of humor over to stand-up.

“In improv, there’s just no set path for where something will go, and no expectations for what’s going to happen,” he said. “Sometimes with improv, the audience and the other people you’re out there with understand that things don’t always work out well, but with stand-up it’s a little more nerve-wracking.”

Lavelle said the skill of being part of improv doesn’t come from getting the biggest laugh. Team members have to work together as leading and supporting characters to put on a powerful show.

“You go and you play the scene and the biggest thing is to have confidence in what your improv prowess can be. You have to understand how scenes work and not force it, and just trust your abilities,” Lavelle said.

Cassie Lecinski, a sophomore in the College of Arts & Sciences attended a comedy show that included the Fugees and enjoyed the group’s hilarity.

Lecinski said she would go to a future Fugee show. “I thought it was really cool how they included the audience and based their sketch on what people said,” Lecinski said.

Tryouts for the group happen at the beginning of the semester. For now, the current members of the Fugees are sharpening their timing and working to make the crowd at Marquette Hall erupt in laughter once more.