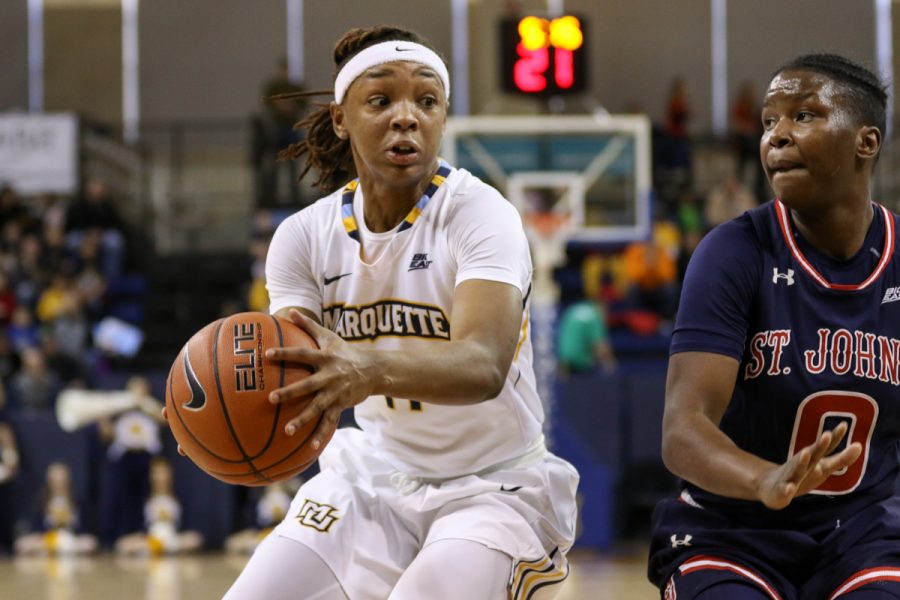 Marquette’s 86-71 win over Xavier this afternoon was one for the record books.

With 9:06 left in the third quarter, BIG EAST leading scorer Allazia Blockton got the ball on the elbow, drove to the low post, turned and knocked down a short jumper. The basket marked her eighth point of the game and 1,000th point of her career. It took her only 56 games to become the youngest player in Marquette women’s basketball history to hit the scoring threshold.

After spending the previous two games coming off the bench, the sophomore guard returned to the starting lineup and posted a dominant 22-point, five-rebound, five-assist and four-steal performance while shooting 60 percent from the field.

Though she started the game quiet with only six points in the first two quarters, Blockton took over in the second half, helping fuel a 14-0 run midway through the third quarter to help secure a double-digit lead that lasted until the final buzzer.

The Golden Eagle offense fired on all cylinders in the final 20 minutes, posting 52 points while shooting 60.6 percent from the field and hitting five of their twelve shots from deep. Along with Blockton, Erika Davenport, Amani Wilborn and McKayla Yentz each finished with double-digit.

Davenport also grabbed her thirteenth double-double of the season, posting 15 points to go along with 12 rebounds — five of which came from the offensive glass.

Xavier, despite being up 36-34 at the end of the second quarter, struggled through the rest of the game. In the second half, the Golden Eagles held their opponents to just 35 points in the second half, shooting a meager 37.5 percent from the field. Senior guard Raeshaun Gaffney, the Musketeers’ leading scorer and fifth leading scorer in the BIG EAST, was limited to just 11 points on 3-for-12 shooting from the field.

With today’s win, Marquette improves their record to 19-7 overall and 10-5 in BIG EAST play.

The Golden Eagles return home to take on Depaul next Sunday.