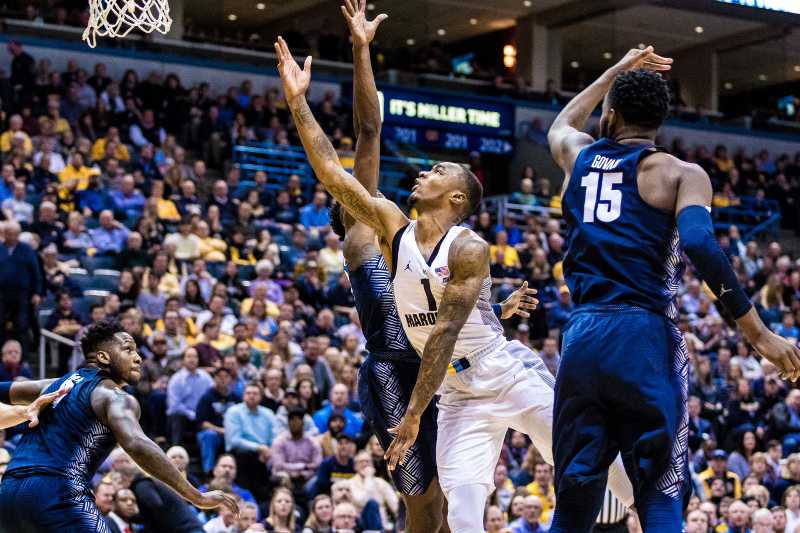 Uninspiring, disheartening, dismal — any of these adjectives could be used to describe Marquette’s performance at Georgetown Saturday afternoon. The Golden Eagles were sluggish out of the gates and could not find their offensive rhythm in the 80-62 loss to the Hoyas.

It was the second-lowest offensive output for Marquette on the season as they shot just 41.8 percent from the field and 21.4 percent from behind the arc. The offense never seemed to click as the Golden Eagles assisted on just nine baskets. This resulted in Marquette playing catch-up for most of the game as Georgetown commanded the lead for 37 minutes.

Duane Wilson seemed to provide the only spark for the Golden Eagles. The redshirt junior supplied 12 points on 5-of-7 shooting after coming off the bench. He also chipped in three assists and four rebounds and did not turn the ball over once.

The trio of Jessie Govan, L.J. Peak and Rodney Pryor led the way for Georgetown, combining for 63 of the Hoyas’ 80 points. Peak posted the most impressive stat line, with 20 points on 6-for-8 shooting, five rebounds, four assists and zero turnovers. As a team, the Hoyas shot 50 percent from behind the arc on 12 shots. Pryor contributed three from downtown.

Marquette seemed like they were going to make it a game with 2:57 remaining in the first half after Wilson completed an and-one to cut the Georgetown lead to just 30-28. However some sloppy play in the final two minutes of the first stanza led to a 11-4 Hoya run. From there, Georgetown controlled the game, maintaining a double-digit lead throughout the entire second half. The Golden Eagles just couldn’t string together enough stops to revitalize their half court offense.

Coming into the game, Marquette was ranked third in the entire country in 3-point shooting percentage, but their usual contributors were missing in action. Andrew Rowsey missed two wide open looks and finished the day 1-of-4 from behind the arc. Sam Hauser and Katin Reinhardt both failed to connect on a 3-point shot. As a team, the Golden Eagles hit just three of their 14 attempts from downtown, and Luke Fischer (3-of-9 shooting) failed to establish much of an inside presence.

Marquette has now lost four of their last five since the upset over then-No. 1 Villanova and three of those defeats have come against teams below them in the BIG EAST standings. The loss moves them to 6-7 in the BIG EAST and into a tie for fifth place in the conference.

With five games remaining, Marquette will likely need at least four victories to remain in the tournament conversation. Their next test will be Saturday as they host Xavier for National Marquette Day.