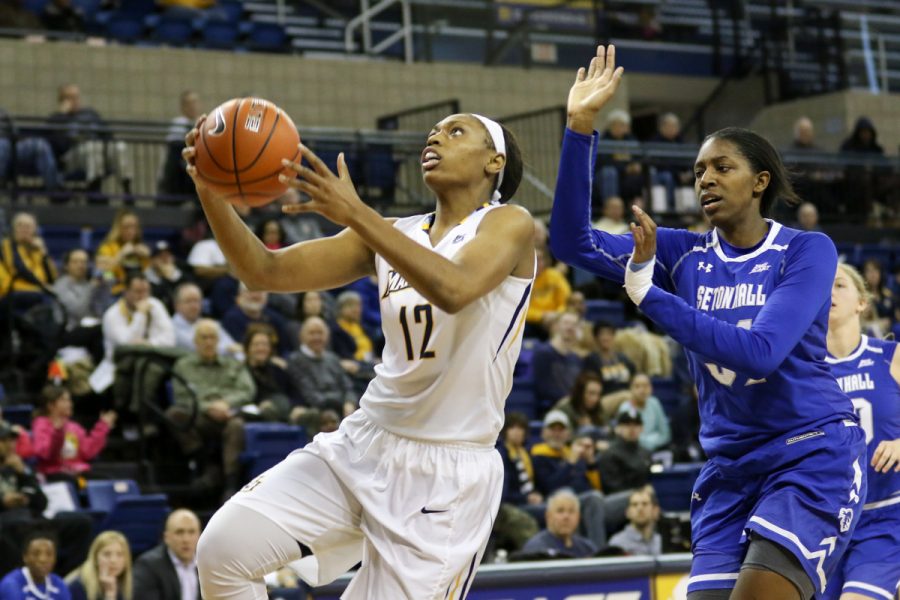 Erika Davenport recorded her twelve double-double of the season in a win against Butler. She leads the entire BIG EAST in double-doubles.

The Marquette women’s basketball team got back to their winning ways with a 72-66 victory over Butler Friday night.

In BIG EAST play this season, the Golden Eagles now stand at 9-5.

Erika Davenport led the team by recording her 12th double-double of the season with 19 points and 11 rebounds. She leads the BIG EAST in double-doubles.

Marquette came out slow in the first half and Butler guard Sydney Shelton took advantage. She connected on three shots from beyond on the arc, several of which were several feet behind the line, and recorded 11 points in the quarter. The Golden Eagle defense would silence her for the rest of the game, however, limiting Shelton to just 13 points.

The first quarter ended with Marquette up 19-18, but both teams would remain neck and neck with 13 lead changes in the half. In the second quarter both teams struggled, scoring only 10 points each. Marquette, however, edged Butler to take a 29-28 lead into half.

Both teams battled in the third quarter, but Marquette never relinquished their lead.

The score stood at 47-45 heading into the fourth quarter. Marquette extended their lead to seven after Allazia Blockton scooped up an offensive rebound and quickly made a layup with 2:32 seconds left, but Butler hung around with clutch 3-point shooting. With 18 seconds left, Butler trailed 67-65. The Golden Eagles stayed composed and secured the victory by sinking their free throws from Butler’s intentional fouls.

Marquette will travel to Cincinnati to take on Xavier Sunday.