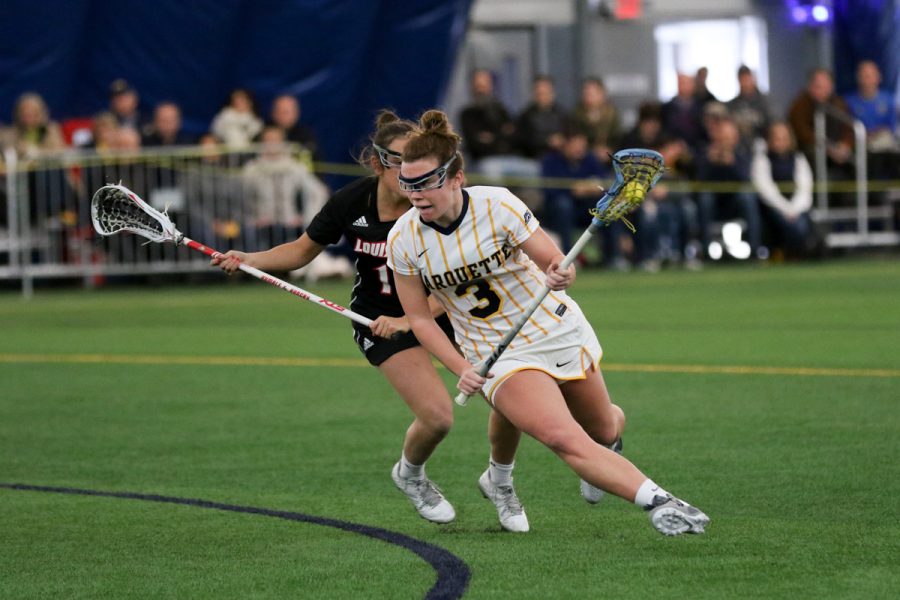 Grace Gabriel drives to the net past a Louisville defender. The sophomore scored a team-high four goals.

Marquette held their own against No. 18 Louisville throughout the game. Statistically, the Golden Eagles outplayed the Cardinals as they outshot them 36-20, but were unable to convert on many of their chances.

“It’s tough to swallow because we feel like we played a good game,” head coach Meredith Black said.

Offensively, the team lived up to their preseason hype as they quickly jumped out to a 3-0 lead.  Goals from Grace Gabriel, Riley Hill and Allison Lane had Marquette in control early on. During the first 10 minutes, the team heavily controlled possession and outshot the Cardinals.

The Cardinals would eventually settle in and respond as they answered with a run of their own with four goals in four minutes. Louisville was able to regain momentum by winning the draw control in the first half 9-5. Both offenses found their groove and when they had possession, scored. Despite outshooting the Cardinals 22-9 in the first half, the Golden Eagles trailed 7-6.

The second half started with another Gabriel goal, who had a team-leading four on the night. The second half consisted of both teams trading goals. Louisville’s defense made things a bit more difficult for the Golden Eagles by limiting space and adding heavy pressure on defense. Every time Marquette scored, the Cardinals seemed to have an answer, specifically from Meghan Siverson and McKayla Conti, who each had five goals for the Cardinals. Louisville’s goalie Brittany Read made key saves for the Cardinals, keeping them in the game.

“Our shooting needs to be better, but give credit to their goalie, she did a great job,” Black said. “We just need to bury more than just those 12 goals.”

After a run of back-and-forth scoring, Louisville finally was able to string back-to-back goals to take a 13-11 lead. Defensively, the Golden Eagles could not make a stop when they needed to, allowing the Cardinals to keep possession and run out the clock.

The Golden Eagles showed their depth offensively with six different players scoring goals. Lane left off where she did last year by scoring a hat trick, while Amanda Bochniak, Claire Costanza and Julianna Shearer also got on the scoring sheet.

Perhaps the biggest question mark entering the game was who would start in goal. Junior Molly Grozier got the nod and put in a decent outing for Marquette, saving four shots. Black said she made her decision yesterday and was happy with how Grozier played.

“I thought she did a good job, she came up with a couple key saves for us and she had a lot of composure in the clear,” Black said.

Despite the loss, the team said they showed they can compete with the best. Gabriel said she believed they competed well and will build off this confidence the rest of the season.

“It just goes to show what we can do, this is our first game and we came out so strong,” Gabriel said. “It just sets the tone for the rest of the season.”

“Obviously I’m upset we lost, but I’m not upset about how we played,” Black said. “We absolutely need to and will gain confidence from this game.”