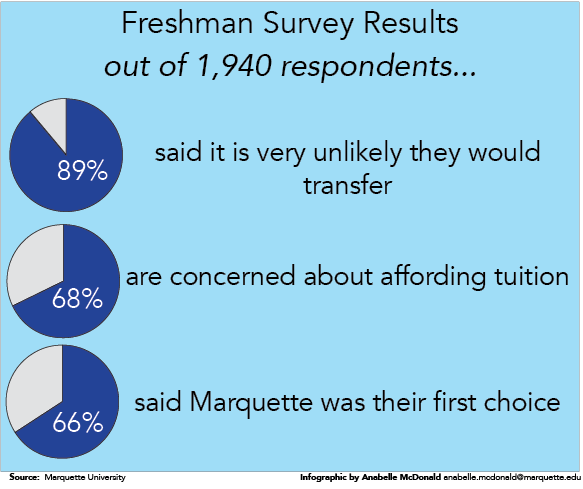 Marquette released its annual freshman survey Thursday, Feb. 2 and 89 percent of the respondents are happy with their Marquette experience, saying their chances of transferring are unlikely.

The survey, which was conducted in August, had a 97 percent response rate and a total of 1,940 respondents, according to the results overview.

Sixty-eight percent of students said they were either very concerned, concerned or somewhat concerned about being able to afford tuition and fees at Marquette.

Anne Deahl, associate vice provost for academic support programs and retention, explained what the university has been doing in response to the survey’s results.

“We are continually striving to learn more about our students who might struggle or need assistance, and how to best provide that assistance,” she said in an email. “Currently there are working groups tasked by the provost working on significant changes to first-year student review, as well as advising, in an effort to enhance support services for students.”

Deahl said changes include the creation of the advising center in the College of Engineering, the centralization of student support services in Coughlin Hall and the pilot first-year seminar to be offered fall of 2017.

The survey continued to reflect the concerns students are having with academic advising. The results of 2016’s senior survey said the overall satisfaction rate with on-campus academic advising is 66 percent.

“Many institutions are striving to streamline transfer processes and attract transfer students, as we are,” Deahl said. “Eighty percent of students who begin at Marquette graduate from Marquette. Among those who do not, some do not find their chosen major available here, need to be closer to home and family or run into unforeseen health or financial issues,” she said.

Laura MacBride, assistant director at the Office of Institutional Research and Analysis, said this decline is not too concerning. “The percentage of those who indicate they are ‘somewhat likely’ or ‘very likely’ to transfer has hardly changed over the past several years,” she said in an email. “We will continue to study how responses to this question are related to student success at Marquette.”

Some notable differences between this year’s and last year’s results included the amount of students who said Marquette was their first choice in colleges (66 percent), which is down 4 percent. Also, the number of students who said they were likely or very likely to work with a facility member on research (72 percent) was up by 7 percent.