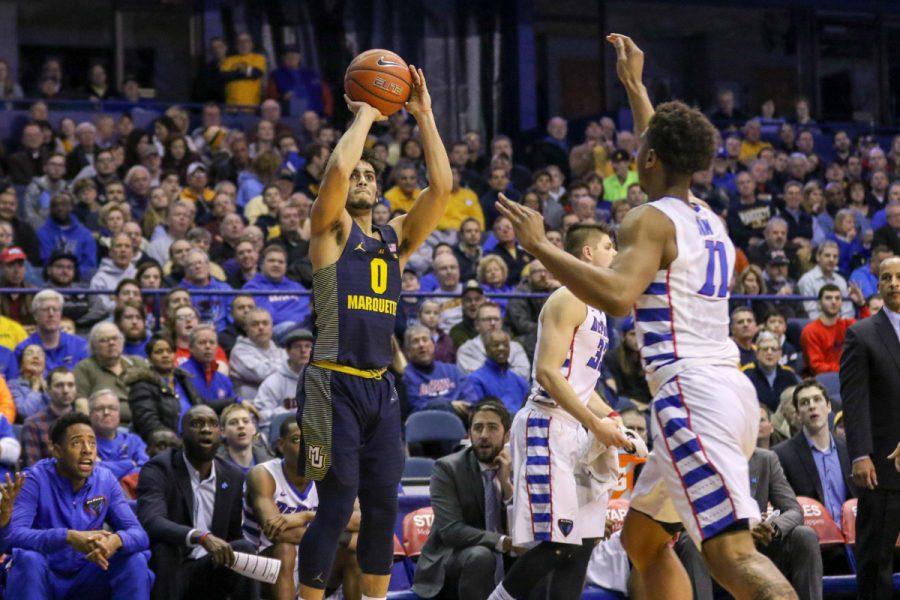 As the whistle sounded for the under-16 media timeout, I glanced up at the scoreboard overhead at Allstate Arena. Marquette men’s basketball had just allowed back-to-back DePaul layups and found themselves down 14-7 after five minutes of play. Head coach Steve Wojciechowski had seen enough out of his starting lineup. In a near whole-sale change, four players were substituted onto the floor.

Then a barrage of baskets unfolded in front of me. First it was Duane Wilson from downtown. Moments later Andrew Rowsey pulled up from behind the arc in transition. Then Katin Reinhardt got in on the fun. I couldn’t believe what I was seeing. In just three minutes and 56 seconds, Marquette drained all five of their 3-point attempts. The Golden Eagles had flipped a 14-7 deficit to a 28-16 lead in the blink of an eye.

Marquette continued to bury their 3-point attempts all afternoon long. They finished with a 63.6 shooting percentage and a season-high 14 made 3-pointers. With the ball constantly moving, the Golden Eagles concluded the contest with 22 assisted baskets. 10 of those assists came on made 3-pointers.

After Saturday’s sharp offensive performance, the Golden Eagles catapulted to No. 1 in 3-point shooting percentage in the entire nation. At 42.6 percent, this would be Marquette’s best 3-point shooting team since 1988-’89 when the Warriors shot 45.3 percent from downtown. That team attempted 236 3-point shots. This team has already made 239 3-point shots.

In the era of the “three and D” small ball lineup, Marquette has adapted well to the current college basketball trend. Wojciechowski has three players on his roster that are in the top-100 nationally in 3-point shooting percentage with Sam Hauser (45.2 percent), Rowsey (48.6 percent) and Markus Howard (51 percent). Both Rowsey (No. 22) and Howard (No. 4) are ranked inside the top-25.

The national average for 3-point shooting percentage is 35 percent. Marquette’s worst statistical shooter, Jajuan Johnson, is still shooting 32.8 percent from behind the arc. Haanif Cheatham (34.3 percent) and Duane Wilson (34.2 percent) are both right around the national average despite having the second and third worst numbers on the team.

With these numbers in mind, it is not surprising that Marquette is living or dying by the three. In 11 conference games, the Golden Eagles are 6-1 when shooting higher than 40.6 percent from three but are 0-4 when shooting below that mark.

The formula to winning is clearly 3-point shooting for the Golden Eagles. When you’re leading the entire nation in 3-point efficiency, you might as well let it fly.