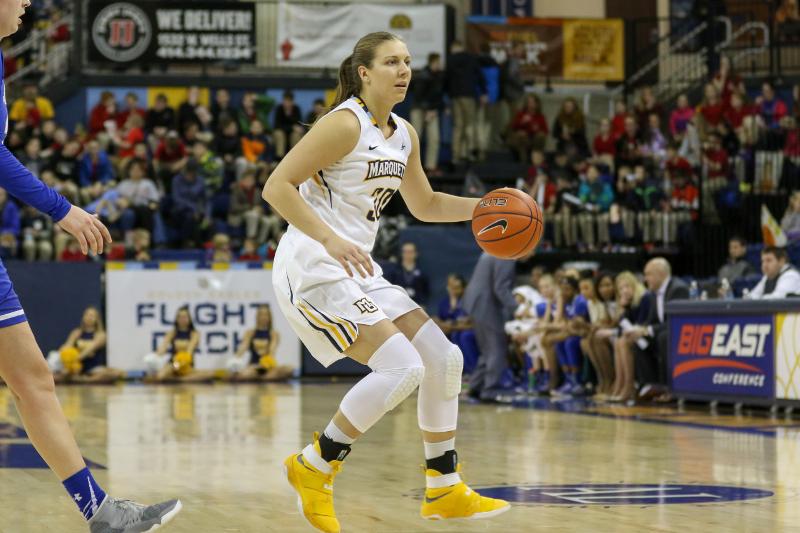 Marquette women’s basketball can be summed up in two plays.

The first is a display of speed, grace and athleticism. An opponent misses a shot, a Marquette big grabs the rebound, the ball gets shuffled to either Natisha Hiedeman, Amani Wilborn or Danielle King (Marquette’s zippy trio of wind-up car guards), who then streak to the hoop for a crafty layup or dump it to a barreling Allazia Blockton or Erika Davenport for the easy rim-rolling put-in.

The second play, usually coming in the fourth quarter of tight games, sees the Golden Eagles on the other side of the ball. An opponent ball handler is met by two pressing players before even crossing half court. A simple pass or pace change beats two defenders struggling to stay in front and move their feet. Now, suddenly, the remaining Marquette players are assaulted in a numbers disadvantage. The good teams ping the ball around until a rotation is missed or a closeout is a half-step too slow, resulting in a good look at the rim or from deep.

Both plays are breathtaking. The former in an adrenaline-fueled kind of way, and the latter in a more literal, doubled-over-need-to-take-a-serious-breather kind of way.

On one hand, this is how head coach Carolyn Kieger wants to play: fast, loose and a little reckless. Run the opponent off the court on offense, wear them out with a press on defense. Rinse, wash, repeat.

On the other hand, Kieger’s incredibly short six-player rotation turns the patented run-and-gun style into a detrimental war of attrition that more than once has come back for a nasty fourth quarter bite.

It’s not unusual for any coach to trust their top players and keep everyone else in the dog house. But if Kieger’s going to treat basketball like a track and field meet, then it’s important to remember that a physical 40 minute game is more of a 4 x 400 relay race and not a 100 meter sprint. You have to pass the baton along.

In Sunday’s loss to St. John’s, eight Golden Eagles touched the floor, though that includes the brief three minute stints both Isabelle Spingola and Shantelle Valentine picked up midway through the first quarter.

Marquette shot a dismal 1-for-19 from deep on Sunday and St. John’s frontline army of hulks wore down Kieger’s smallish lineups.

Spingola scored 21 points against Seton Hall Friday morning and hit five of her six attempts from deep, and the 6-foot-3 Valentine is one of only two listed centers on Marquette’s roster. It’s easy to see how the skills of being a good shooter or a large human being could’ve helped out on Sunday.

Instead, McKayla Yentz (who, to be fair, is both a good shooter and has size) played 24 minutes, no one else played less than 30, and King went the distance and stayed on the court for all 40. The result: a fourth quarter in which Marquette got outscored 28 to 18, facilitating St. John’s ultimate 10-point victory.

In fact, in their five BIG EAST losses this year, Marquette has posted a negative 28 net rating in the fourth quarter. Their one loss without a fourth quarter net-minus? Another defeat at the hands of St. John’s Jan. 8 in which the Golden Eagles outscored their opponents just 19 to 18 in the final ten minute frame.

Three of Marquette’s five conference losses came in the last four games. While it’s not time to issue a severe mid-season drop-off warning just yet, Kieger would be wise to keep one eye on the fatigue radar. The Golden Eagles could very well weather this slump, but it’s beginning to look like the style of play and the short bench might just be catching up to them.

Unfortunately for Kieger, those two things might just be mutually exclusive — so long as the rotation remains exclusive, too.