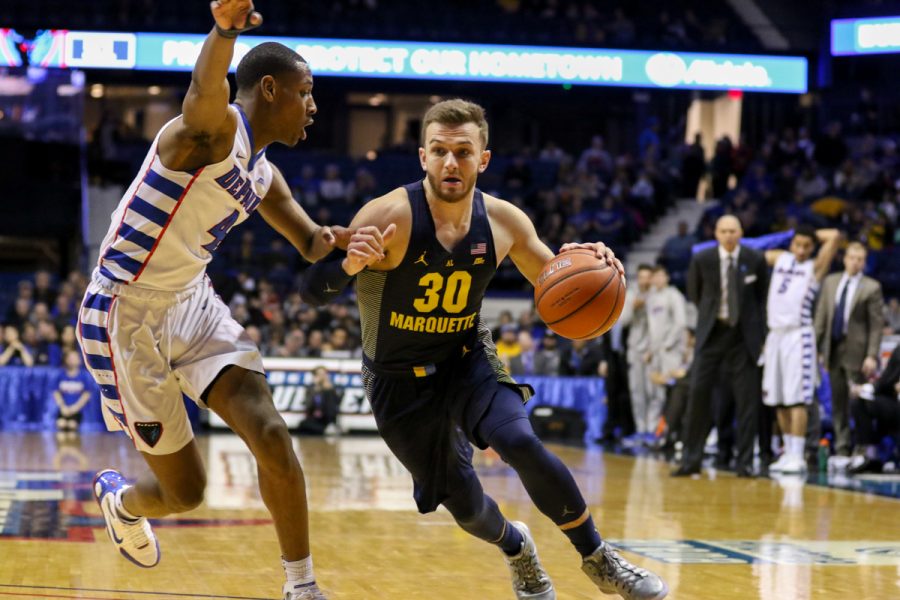 Microwave ovens cook food as much as ten times faster than conventional ovens. Microwaves heat the inside and outside of food at the same time using radiation.

Andrew Rowsey is what basketballs experts often call a microwave, but it doesn’t have anything to do with food.

The redshirt junior comes off the bench, lets one shot fly and is suddenly aflame. Saturday at DePaul he missed his first shot, but proceeded to hit his next three, all of which were 3-pointers, to spark an 18-0 Marquette run.

Despite scattered minutes and going long periods of time without shooting, it’s become common practice for the Golden Eagles’ 5-foot-10 point guard to enter a game and declare himself the best offensive player on the court.

The University of North Carolina-Asheville transfer is sporting an unfathomable 147 offensive rating in conference play, aided by 56.6 percent shooting from 3-point range in that time, both of which are the best in the BIG EAST.

In 10 of Marquette’s 11 conference games Rowsey’s offensive rating has been 117 or higher. The only game where he didn’t reach that number was when he played just three minutes against Seton Hall when Markus Howard scored 22 points and was far too good to take off the court. He’s broken 150 four times, 160 three times, 170 twice and reached an implausible 191.7 against Creighton.

Rowsey is among the best in the nation at 3-point shooting (22nd) and draining free throws (7th), but his ability to get defenders in the air with the pump fake, either to draw fouls or create a lane to the hoop, should not be overlooked.

Rowsey has drawn five shooting fouls from behind the 3-point line in the last five games. Two of which he made the shot and completed the rare four-point-play.

“After I get my shot going it’s kind of easy for them to fall for the pump fake,” Rowsey said. “I can sort of tell the way they’re on their toes and stuff. So when I just come off it and I get them in the air I go into them, I always pump fake so even if they’re not there I just pass it and go back off the ball.”

Though only 11.6 percent of Rowsey’s shots come at the rim, a team low, he’s making 70.6 percent of those shots per Hoop-Math. It’s not that he can’t take it to the hoop and score, it’s that knocking down 56 percent from three is a more efficient way to score than making 70 percent on layups.

Rowsey has been great offensively for Marquette this season, but lately he’s been spectacular. As it stands right now, he’s a candidate for BIG EAST Sixth Man of the Year and the most efficient player on a top-10 offense in college basketball.