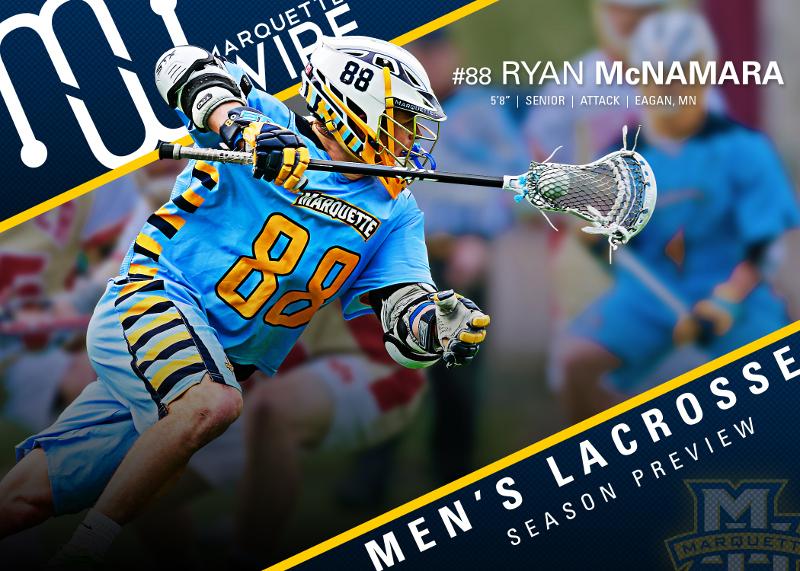 Ryan McNamara is the favorite to lead the team in scoring this season.

Last season will be a tough act to follow, especially with the graduation of the seniors that had been with the program since its infancy. There is still plenty of talent on this roster, which has led to the Golden Eagles ranking around 20 in all of the preseason rankings.

Attack: Ryan McNamara is the focal point of the roster. He led the team in goals (40) and points (57), and his goal total was a program record for most in a season. Kyran Clarke was the fifth-leading scorer on the team last season, setting a new career high with 13 goals. The group is rounded out by Joe Dunn, who got some time in the starting unit last season when now-graduated Conor Gately was injured. He scored seven goals and one assist in 10 games.

Midfield: When Kyle Whitlow went down with a season-ending knee injury in nonconference play, it felt like a back breaker. Marquette fought on, and if you want to find a silver lining from the injury, it prepared the Golden Eagles midfield for his departure.

Senior Andy DeMichiei took over both literally and symbolically. He finished third on the team in scoring, and when the team misplaced his uniform on the trip to Denver for the BIG EAST Tournament, he wore Whitlow’s No. 6 instead. He stuck with it last season after it brought the team luck and will continue to wear it this season.

One of the best signs for the future offense is a pair of underclassmen on the offensive midfield with plenty of potential, Tanner Thomson and John Wagner. Thompson, a junior, scored 19 goals and two assists in 15 games.

Wagner took time to adjust to the college level and moved between attack and midfield a bit last season, but came with high expectations. Ranked as one of the top-200 seniors in his high school class by StudentSports, Wagner was a three-time All-State selection in Michigan and played for Canada this summer at the U-19 World Championship.

Zack Melillo will be vital at the faceoff-X once again. A transfer from NJIT, he won 56 percent of his draws in his first season as a Golden Eagle.

Defense: The defensive unit is the group with the most turnover from last season. Marquette will experience life without its two defensive stalwarts, B.J. Grill and Liam Byrnes, for the first time now that both have graduated and moved on to the professional ranks. Amplo will rely on Nick Eufrasio to fill that role. He started 14 of the 16 games he played last season, grabbing 28 ground balls during the 2016 campaign.

He’ll likely be joined in the starting lineup by two new faces: Jackson Ehlert and Nick Grill. Ehlert, a transfer from the Community College of Baltimore County-Essex, led the Knights to the junior national championship last season. CCBC Essex gave up just 5.4 goals per game.

Grill, a freshman, is the younger brother of B.J. Grill. He’s slightly bigger than his older brother, standing at 5-foot-7 and comes with an impressive resume. He was the 2016 New Jersey Player of the Year, a 2016 USA Today All-USA Boys Lacrosse First Team selection and a two-time high school All-American.

Marquette will also have a new starter at long-stick midfield with the graduation of Tyler Gilligan. Noah Richard is the favorite for the job after making an enormous jump from his freshman year. He was particularly dominant in Marquette’s scrimmage against Michigan in January.

Brendon Connolly should also get time, and Jordan McKenzie will too once he returns to 100 percent health. He missed all of last season with an injury, and despite getting some playing time against High Point in a scrimmage, he’s still a few weeks away.

Goalie: Junior Cole Blazer took over the starting reins in a victory against then-No. 6 Villanova and never looked back. The Libertyville, Illinois, native posted a 9.59 goals against average and a .503 save percentage in eight appearances last season. Jimmy Danaher, who was Marquette’s starter the previous two and a half seasons, is the backup.