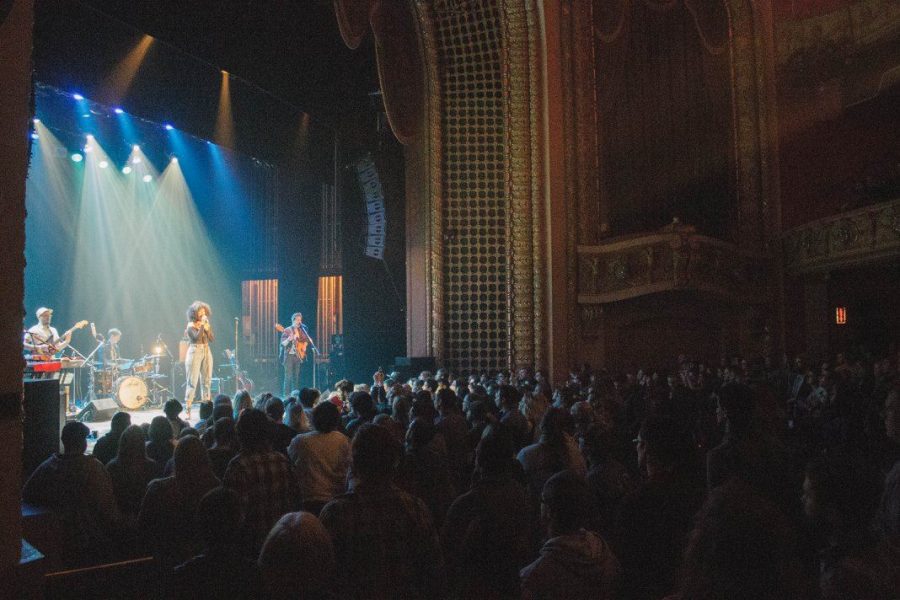 My first thought upon entering the historic Pabst Theater last night was: “So. Many. Instruments. Are some of them for smashing? Are they rich enough to smash instruments?”  The stage was set up for Cuddle Magic, a Brooklyn band that’s been opening for PHOX the past week on their farewell tour.

The crowd had a nervous energy to it.  Among the ironic 90’s sweaters, people spoke in low voices, wondering what PHOX’s last setlist ever consisted of.

A little past 8, Cuddle Magic took the stage.  Their music was … a lot.  Starting with a few older songs, the band shocked me with their abrupt choruses and copious layering.  Folk-synth is definitely a new genre for me, and maybe it just takes a while to adjust, but it was overwhelming.

Later on in their set, the tracks from “Ashes/Axis,” their new album, acted as their savior.

At last, it was time for PHOX.  The Wisconsin natives grew increasingly popular after their self titled 2014 release, even playing on Conan and NPR’s Tiny Desk series.

I actually saw PHOX two years ago at the Pabst and it was delightful to watch how the band has improved their live show.  Opening with the light “Leisure,” pianist Matteo Roberts and singer Monica Martin immediately showed off their chops.

Every member of the five piece seemed to know exactly where they fit in within the music, which lead to an almost impeccable performance as well as an engaged, to say the least, audience.

“Evil” had the crowd singing and even dancing during its funky breakdown.  Later, the band’s most popular song, “Slow Motion” caused a palpable spike in energy.

PHOX went on to play bonus tracks from the deluxe edition of their album, including “Blue and White.”  Despite a woman in the crowd intermittently yelling both “I love you Monica” and “Play Raspberry Seed!”, the band stuck to their original setlist.

The encore included an Aaliyah cover which almost topped the original as well as another bonus track, “Espeon.”

All in all, PHOX will always stay in my heart because of their amazing performance at the Pabst last night, as well as their lasting legacy as original, thought provoking artists.  Martin left us with a beautiful thought, “Tip your bartender, punch a nazi, I love you.”

Are You That Somebody (Aaliyah cover)
Espeon