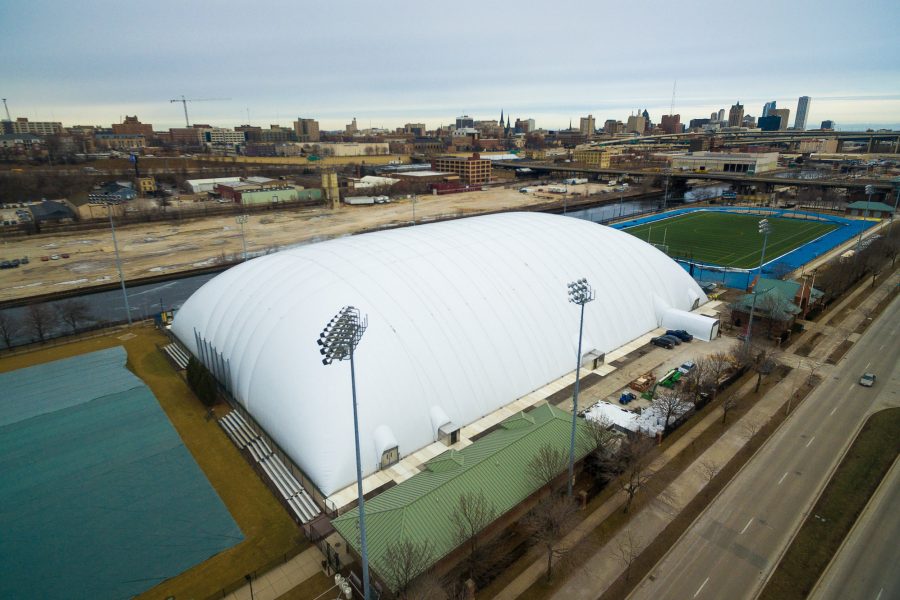 “I’m as thrilled and excited as you can possibly be,” athletic director Bill Scholl said. “This will give (students) the chance to fully develop as an athlete.”

Construction began in October 2016 and, after several delays from building and designing the dome, it’s finally open to all student-athletes.

“Even prior to my arrival at Marquette, we’ve talked for years about providing adequate indoor training space for our field sports,” Scholl said. “It’s nice to walk in and say we finally accomplished it.”

The facility was supposed to open a week prior, but plans were hindered by several factors. The soil underneath Valley Fields is very soft and caused delays. It took longer than expected to install the footings and help support the foundation so that the structure does not settle into the ground. Mechanical devices used to inflate the dome also took longer than expected to arrive on site.

The cost of the dome is estimated at $3.6 million and was paid for by various donors and athletic funds set aside by the university.

“We consider ourselves a good partner with Marquette,” Rod Krings, the project manager of the dome from CD Smith, said. “They’re good clients with high expectations. We wish all our clients were like that.”

Krings said despite being a significant undertaking, the dome layout is not complicated. “It’s a really simple concept,” he said. “It’s like pitching a tent when going camping.”

The dome is on a much larger scale than the average tent, so complications came up during the process.

“A big tent,” Scholl said. “One that has to stand up to wind-loads and snow-loads, all those sorts of things.”

The golf and lacrosse teams were among the first to practice in the new facility. Along with practices, the fields can host games and tournaments inside during the season.

“If you play lacrosse or you play soccer, it’s hard to practice on a basketball floor in the wintertime,” Scholl said. “This gives them a chance to truly train how they should.”

The 16 varsity sports and countless clubs and recreational sports will also make use of the facility for the six months of the year it remains up.

“Having the bubble (for practices and games) is a big advantage for us,” Andy DeMichiei, a senior lacrosse player, said.

The university is still working out where the dome will be stored during the other half of the year.

The dome is expected to last approximately 25 years.