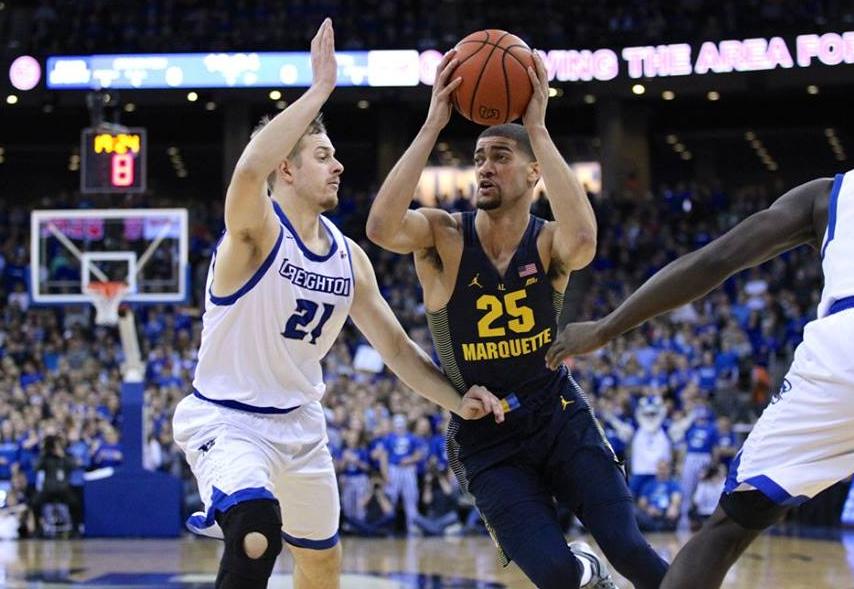 Marquette and Creighton are two teams with a serious shot at the third seed in the BIG EAST.

When Marquette men’s basketball upset No. 1 Villanova Tuesday night, the Golden Eagles looked as likely as any of the BIG EAST’s second tier teams to climb up and claim third place in the conference.

The next night No. 16 Creighton looked poised to bounce back on the road at bottom-dwelling Georgetown, but the Hoyas obliterated the Bluejays, further bolstering Marquette’s chances of bringing home BIG EAST bronze.

Thursday, No. 24 Xavier fell to No. 19 Cincinnati in a game that had no effect on the BIG EAST standings, but added to the pile of evidence suggesting the Musketeers may be riding more on preseason expectations than anything else at this point.

So naturally when Marquette had a chance to make a statement Saturday with a convincing win at home against Providence, they lost a barnburner in front of their biggest crowd of 2017. The loss handed sole possession of third place to Creighton, who have now played three games without their star Maurice Watson Jr.

It also gave Xavier the opportunity to move into fourth place with a win over St. John’s Sunday and they did exactly that, but it came at a cost. Star point guard Edmond Sumner, a potential All-BIG EAST First Team player, suffered a serious knee injury in the second half resulting in a season ending ACL injury.

Every time it looks like the race for third place is heading one way, the basketball gods shake things up.

It’s unlikely the team that finishes in third place will have more than six or seven losses (the last two third place BIG EAST teams finished at 12-6). That makes it tough for the likes of Providence, St. John’s, Georgetown and DePaul, who all already own at least six losses, to squeak in.

Seton Hall has five losses, but only three wins and the remainder of their schedule is tough. They still have road games at Xavier, Butler and a suddenly-hot Georgetown team, plus home games against Villanova and Creighton. It would be borderline miraculous for the Pirates to win more than three of those games, so it’s fair to say they’re not in the hunt for third.

That essentially leaves the competition for third to three teams — Xavier, Creighton and Marquette — two teams who each recently lost a top-seven player in the league for the season, and the Golden Eagles.

If one of these teams gets hot there’s a chance they could catch Butler since they all still have a game left against the Bulldogs, who have yet to play at Villanova. But considering the limitations of the Watson-less Bluejays, the Sumner-less Musketeers and the talented-but-inconsistent Golden Eagles, Butler is a safe bet for second place.

The good news for the three teams chasing Villanova and Butler is they all have tournament resumes and things would have to change dramatically soon for that to change.

Keep an eye on the final week of the season when Marquette closes out BIG EAST play with a road game at Xavier and a home game against Creighton. If there’s anything in this mess to be confident about, it’s that this three-way melee will be a fight to the bitter end.