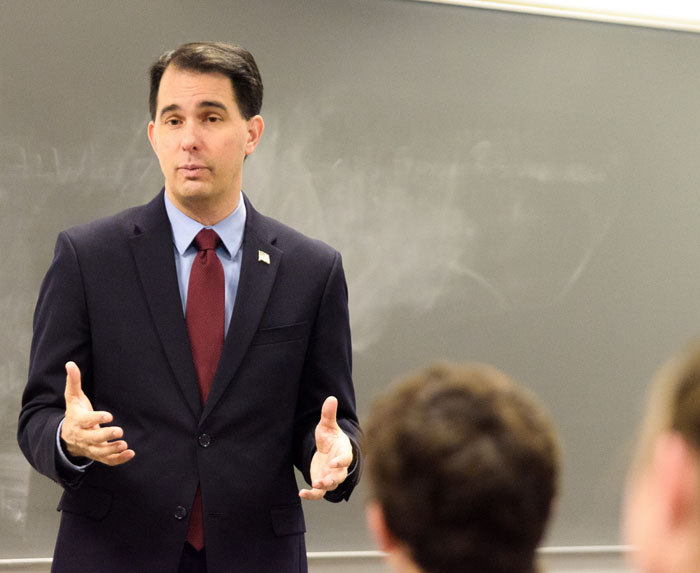 Gov. Scott Walker stressed the importance of student organizations, such as the Marquette College Republicans.

The Marquette University College Republicans started their first general meeting of the year with a packed room and special guest—Wisconsin Governor Scott Walker.

Walker was once a student activist himself, and attended Marquette University for a time in the late 80s. There are disagreements as to why the future governor left the university shy of graduation, but one thing is clear: his time here was spent climbing the ranks of MUSG and building a political platform for himself.

His 1988 campaign for MUSG president, although unsuccessful, brought out record student voter turnout. Following his departure from Marquette, he worked for a few years before mounting a 1993 run for state legislature.

When asked why Walker is a role model and someone the club wanted to have come speak, club vice-chair Elizabeth Michels, sophomore in the College of Communication, said, “I believe that Walker really encompasses the ideal Republican, he really believes in Wisconsin, he puts Wisconsin first and he exemplifies his beliefs and faith in all that he does.”

The governor gave a fifteen minute speech in which he stressed the importance of student organizations, such as the Marquette College Republicans. He thanked the club for all their hard work in recent local, state and national elections.

“We couldn’t have done it without the youth vote,” Walker said in reference to the recent Republican wins in elections nationwide.

Wisconsin native, club member and Marquette senior in the College of Arts & Sciences Brian Lander said, “I’ve seen the entire process of Scott Walker being elected and elected again, and I’ve always looked up to him since I’ve seen him the past eight years of my life … he’s a really big role model for the working class in Wisconsin.”

There are now more people employed in Wisconsin than ever before in history, according to Walker. “The track you’re on here at Marquette … you can actually get a job,” he said of the opportunities created by a Marquette education.

When asked post-speech what his advice was for students pursuing political careers, he said, “I think one of the best things, I learned it here when I was at Marquette, was get involved.” He stressed the importance of volunteering for candidates and again thanked the students in attendance for their hard work.