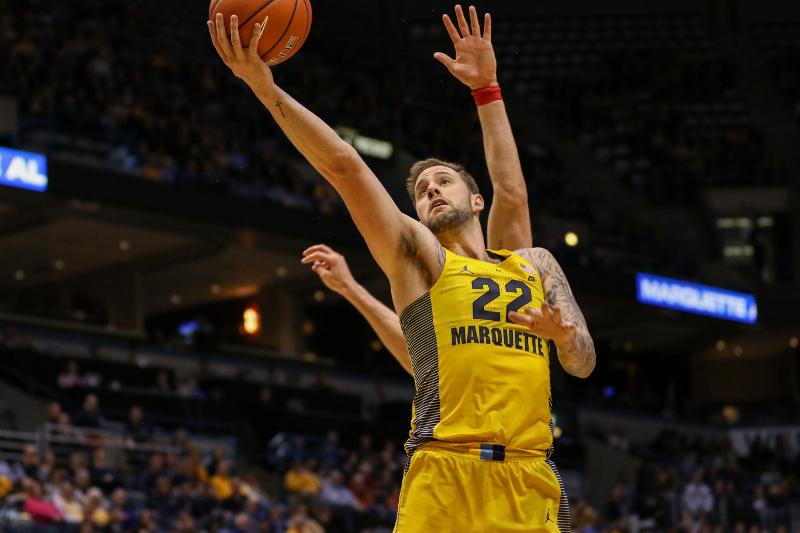 Late in the first half of Marquette’s massive road win at No. 7 Creighton Saturday Katin Reinhardt went on a 10-0 run entirely by himself, pushing Marquette to a 10-point halftime lead.

His 10-0 run, secure late-game ball handling and playmaking highlighted the graduate transfer’s best performance of the season. He led the team with a season-high 21 points on 8-for-13 shooting and notched seven assists, matching a career best.

For the first 10 games, he shot above 38 percent in a game just three times.

In the following six games, he shot below 42 percent in a game just once.

During the first 10 games, Reinhardt shot 28.6 percent from 3-point range. In the last six games he’s made 46 percent of his 3-pointers.

When a player’s game changes this dramatically, there’s usually a good explanation. For Reinhardt, his success revolved around health.

He told reporters earlier this month that he’d played on an injured Achilles’ tendon since the team’s preseason scrimmage against Dayton.

“I kind of tweaked it a little bit, but didn’t think anything of it,” Reinhardt said. “The Fresno game (Dec. 6) I was in warmups and made a move, and I felt it, and that’s when it started hurting even more. I sucked it up and tried to play against Wisconsin, and coach talked about keeping me out the rest of the games and having me rest it a little while.”

He sat out the team’s final two non-conference games following the Dec. 10 Wisconsin game. He made his return against Georgetown Dec. 28, but he hadn’t practiced in 17 days and there was plenty of rust to shake off. He went 2-for-6 from the floor, including 0-for-4 from deep, but that’s where the slump ended.

When Marquette went to Seton Hall on New Year’s Day, Reinhardt was a brand new man, draining four of his five 3-point attempts.

“(Resting) helped tremendously,” he said after the game.

The former USC and UNLV guard is himself once again.

“I’ve just been staying in the gym,” Reinhardt said. “I know I had a tough preseason, but coach and my teammates have had tremendous faith in what I can do and I just had to trust that. Now I feel like I’ve gotten into a better flow and I feel a lot more comfortable on the floor.”

Though Reinhardt started the first four games of the season, he’s been coming off the bench ever since, but it doesn’t seem to bother him.

“Katin’s a starter for us, even though he doesn’t start the game,” Wojciechowski said. “More importantly, he’s a finisher.”

He’s not just saying that, either. Reinhardt has played at least 25 minutes in each of those six games, including a season high 34 minutes Saturday.

Now that Marquette has a signature win on its resume, a clearer path to the NCAA Tournament and a healthy Reinhardt, the light at the end of the tunnel has certainly gotten brighter for the Golden Eagles.