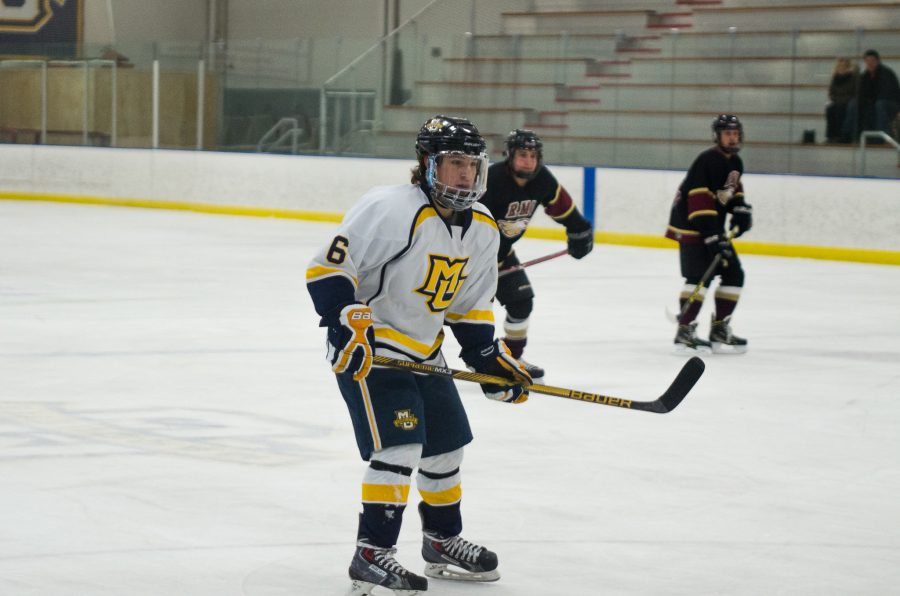 Marquette hockey dropped only their second game of the season after splitting a pair of games against Bradley University this past weekend.

The team fell to 16-2 overall and squandered a golden opportunity to place themselves in great position to qualify for nationals.

Unlike other D1 Marquette teams, the club hockey team does not meet over winter break. The team had over a month off before Friday’s game. Head coach Will Jurgensen said he was pleased with their efforts Friday in a 4-2 victory.

“Friday was a great game, we were only coming off two practices and we had one of the best periods all year,” Jurgensen said.

The Golden Eagles had a three-goal second period with goals from Lee Barnes, Michael Desalvo and Matt Morgan to take command of the first matchup. After a late goal from Bradley in the third, Marquette was able to hold on for the win.

Early on, Saturday’s game looked to be no different than Friday’s. Marquette jumped out to a two-goal lead after Adam Benkovich and RJ Deneweth scored. The team was well on its way to sweeping Bradley, leading 5-2 early in the third. However, wanting to improve their resume as well, the Braves responded when Marquette committed three crucial penalties, allowing Bradley to tie the game. The Golden Eagles would then allow another score late in the game, giving Bradley the lead.

“They scored three power play goals, then we committed a bad turnover and they took the lead,” Jurgensen said. “We just lost focus for a little bit.”

Marquette usually plays well down the stretch and Jurgensen admitted he was surprised with their collapse. The team struggled with the penalty kill and it allowed Bradley back into the game. Jurgensen’s message after the game was that they must remain focused and play complete games.

“I guess a game like this is better if it happens now rather than playoffs or nationals,” Jurgensen said. “It’s evident the boys were disappointed, so we’ll see how they respond.”

A positive the Golden Eagles can take away from the series is that the members of the team believe they beat themselves. Jurgensen said they will address these issues and bounce back.

“They didn’t do anything special to win, we just shot ourselves in the foot,” Jurgensen said.

Marquette is currently ranked second in the Pacific region of the ACHA behind Iowa State University. The top two teams in each region receive automatic bids to nationals while teams 3-10 participate in a regional playoff for the last two spots. Bradley sits three spots behind Marquette.

Marquette will travel to Tennessee this week to take on Vanderbilt. It will be the first ever matchup between the two schools.