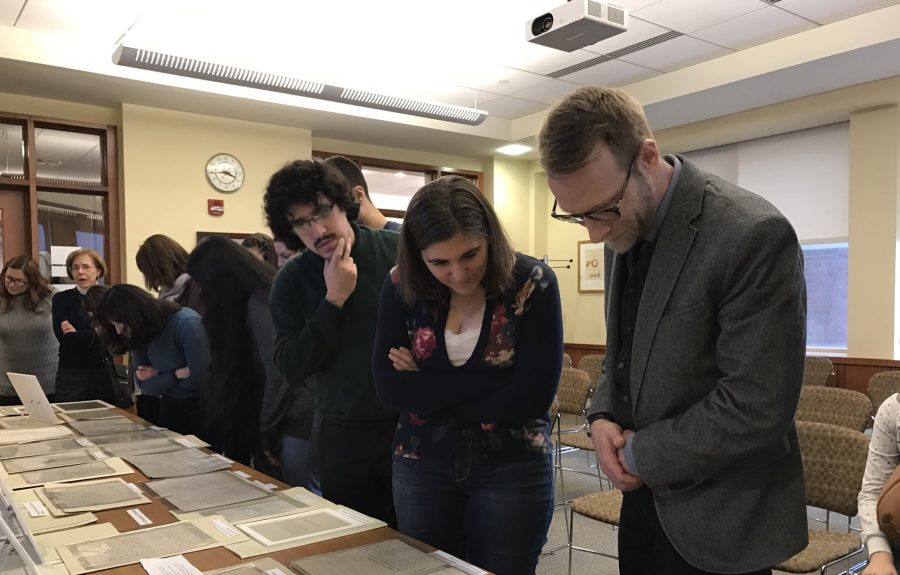 Timothy Schulz (far right) came with his girlfriend Caroline Miller (left) to the viewing session for his birthday.

The Raynor Memorial Libraries’ Department of Special Collections and University Archives added a rare first edition copy of “The Hobbit” to its Tolkien collection.

This version of the epic fantasy is one of 1,500 first editions published in 1937 that include his original artwork.

The university obtained the book when it appeared for sale in a London auction house.

Marquette owns 11,098 pages of Tolkien’s writing across four different fictional works. These works include “The Lord of the Rings,” “Mr. Bliss” (a children’s picture book), “Farmer Giles of Ham” (a medieval fable) and “The Hobbit.”

The department holds hour-long public showings of the collection throughout the year. The audience can personally view the special edition of “The Hobbit” and other early publications from Tolkien, handwritten manuscripts, personal letters, sketches, artwork, watercolors, notes, voice recordings and even an unpublished epilogue set 15 years after the events of “The Hobbit.”

William Fliss is an archivist in the Department of Special Collections and ran the presentation of the Tolkien collection.

Fliss explained Marquette first acquired Tolkien’s manuscripts in 1957 for less than $5,000. The collection was recently appraised, but the department would not release the present number.

The library director at the time, William Ready, negotiated the sale through an intermediary of Tolkien in 1956.

“It’s a lot more than what we originally paid,” Amy Cooper Cary, the head of the department, said.

At a recent public viewing, about 30 fans crowded into the cozy room on the third floor of Raynor Library. On a long table sat hundreds of plastic-encased papers. The audience awed at the weathered pages from the early 1900s.

“Tolkien’s writings were a wonderful influence on me since I was very small,” Timothy Schulz, a registered nurse and long-time Tolkien fan, said. Schulz’s favorite work by the English author is “The Silmarillion.” He attended the showing with his girlfriend Caroline Miller, a graduate student in the College of Health Sciences.

“I’ve seen the films but I’m not as big a fan as (Schulz),” Miller said, who brought Schulz to the viewing for his birthday.

Along with the PowerPoint presentation, Fliss gave insight on the thought and writing process of Tolkien. The full collection includes sketches of maps, calligraphy, character descriptions, plot structure and the thousands of changes he made during his first drafts.

Some of the delicate calligraphy is written in Elvish, a fully functioning language Tolkien created in 1910.

“During World War II, paper was scarce in England,” Fliss said. “He (Tolkien) would use any paper he could get his hands on.”

Tolkien would draft “The Lord of the Rings” on the back of his students’ essays at Oxford. Fliss showed these early drafts and comments from Tolkien’s colleague, C.S. Lewis, who also taught at Oxford.

Besides the public viewings, there are copies of the original manuscripts permanently displayed on the third floor of Raynor.

“This is the only place in the world you can see some of this stuff,” Fliss said. “We were in the right place at the right time (referring to when Ready first purchased the manuscripts).”

There are five more scheduled public viewings of the collection this year.