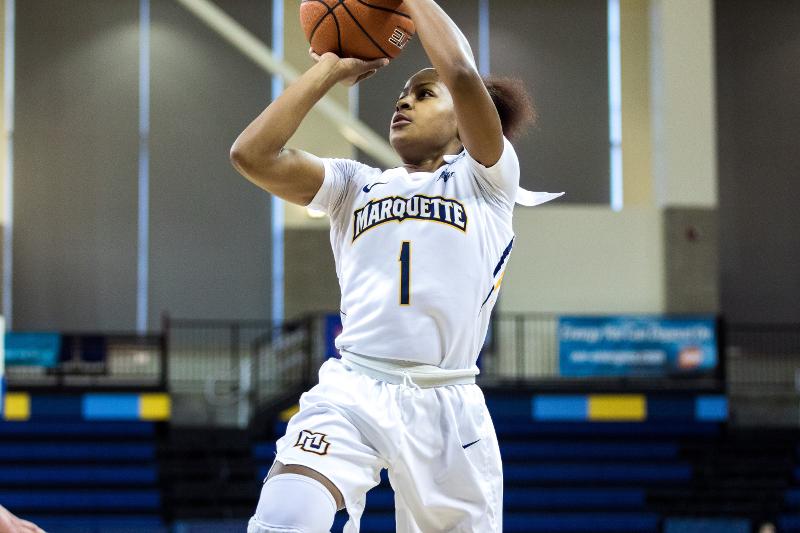 A Tale of Two Halves

Tonight’s game can truly be told as a two-act play. The first act saw Marquette looking lost and overwhelmed, ending the second quarter with a 15 point deficit. The score reflected Depaul’s experience as the veteran run-and-gun team, putting up quick points and building a sizable early lead.

Immediately after intermission, things looked different, and certainly less dire for the Golden Eagles. Suddenly, Keiger’s squad was beating Depaul at their own game: getting stops, flying down the floor, rumbling towards the rim, and, if possible, finding one of the open shooters dotted along the three-point arc. In the second half, Marquette outscored Depaul 62-47, putting the score at an even 91 to 91 at the end of regulation.

It all culminated in a thrilling overtime featuring a decisive whodunnit video-reviewed out-of-bounds call that gave Marquette possession of the ball up one with 36 seconds left on the clock. Each teams stars went shot for shot with each other over the extra five minute frame until the curtains closed and Marquette scored a remarkable 102-101 victory.

The Marquette-Depaul Show is traveling to Milwaukee on February 19. Get tickets now, ’cause if it’s anything like the original run in Chicago, it’ll be quite the crowd-pleaser.

Marquette playing Depaul is not anything close to a clash of styles and the proof is on the stat sheet, as both teams had 91 possessions. DePaul ended the game with a startlingly fast average possession time of only 11 seconds — nearly one-third of the allowed shot clock time. Marquette came in just a tad higher at 12 seconds per possession. Each coach barely stretched their rotations outside of their trusted top six players; both teams had five players who played over 30 minutes, or two-thirds of the game. Pairing the short benches with an extra overtime period and breakneck speed made for an offensively focused game and some exhausted players at the end.

Tonight, Marquette’s 5-foot-5-inch point guard Danielle King made a statement: just because she’s undersized doesn’t mean she should be underestimated. She proved that by pouring in 27 points, four rebounds, and four assists on 10-for-17 shooting. Nineteen of her 27 points came after the half, allowing Marquette to climb back into the game. She also knocked down three of her five attempts from deep.

King made impossible shot after shot, zipping straight into DePaul’s forest of a front line and somehow converting below-the-basket layups through a thick canopy of arms and bodies. None of those shots were more important than her dribble-drive layup with 11 seconds left in regulation to tie the game at 89.