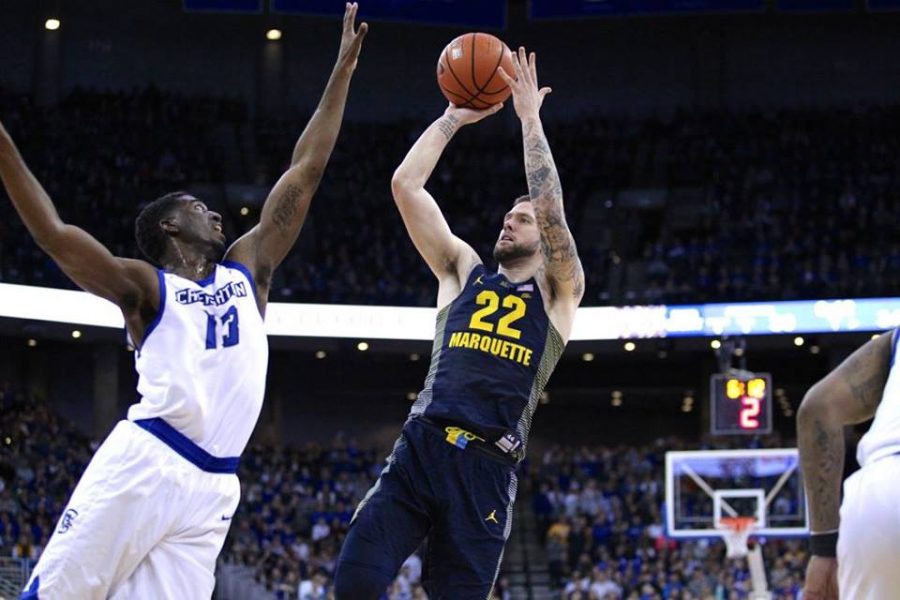 Katin Reinhardt scored 21 points in Marquette's victory against No. 7 Creighton

Shot to the Reinhardt

Katin Reinhardt was a one-man show at the end of the first half, willing the Golden Eagles to a 10-point lead at halftime. With Marquette up 38-37, Reinhardt scored ten straight Marquette points on two 3-pointers and a pair of layups. The first five points came 17 seconds apart, as he followed up a 3-pointer with a steal for an easy basket.

“I didn’t even know that was a 10-0 run,” Reinhardt said. “I just did a good job at taking what the defense gave me. They switched their bigs off of me. I got to have a lot of open shots in the first half.”

Following Reinhardt’s run, Jajuan Johnson made a layup, giving Marquette a 13-point lead. At the time, that was the largest lead a team has had against Creighton this season, but Marquette went up by 18 in the second half.

“We talk a lot about end of half, start of half and end of games, even though at times it may not seem like it,” head coach Steve Wojciechowski said. “To be able to go to halftime with a 10-point cushion was big.”

Reinhardt finished with a team-high 21 points, shooting 8-for-13 and 4-for-9 from 3-point range. He also dished out seven assists, grabbed three rebounds and two steals.

If Creighton wants to continue its dominance this season, the Bluejays have to overcome arguably the most impactful injury in college basketball this season. Star point guard Maurice Watson Jr., who led Division I basketball with 8.8 assists per game, tore his ACL in Monday’s matinee against Xavier. He was tearful as he entered the CenturyLink Center court before team introductions.

“It was harder on Maurice than he probably anticipated,” Creighton head coach Greg McDermott said. “These guys are his good friends. They see that and obviously they hurt for him and feel for him.”

Isaiah Zierden started at point guard in his place, sliding over from his usual backup shooting guard role. Davion Mintz, who played sparingly with Watson in the lineup, came off the bench.

Mintz spent more time on the floor, scoring a career-high 17 points in 26 minutes. His assist to turnover ratio of 4:1 was impressive for a freshman.

“I told him walking off the court how proud I was of him,” guard Marcus Foster said. “All he’s been talking about to me is having his turn to show people he can play.”

Zierden scored 15 points on 4-for-5 shooting, grabbed five boards and notched an assist.

“I’ve got to be more vocal and be that calming presence,” Zierden said.

It was clear from tipoff that McDermott focused on shutting down Marquette’s power duo of Markus Howard and Andrew Rowsey. McDermott put one of his best defenders, Khyri Thomas, on Howard to start the game despite Thomas starting at the three. When Rowsey came in, Thomas stayed on the point guard, playing Mintz on Duane Wilson to shield him on defense.

Both Rowsey and Howard were still able to show their stuff, just in shorter spurts than the past few games. Rowsey scored 11 points on just three shots, while Howard scored nine of his 11 points in a seven-minute span in the second.

Creighton and Marquette were the two best-scoring offenses in the BIG EAST coming into the game, and both teams enjoy playing fast. It’s no surprise today’s game was a track meet.

Stat of the night