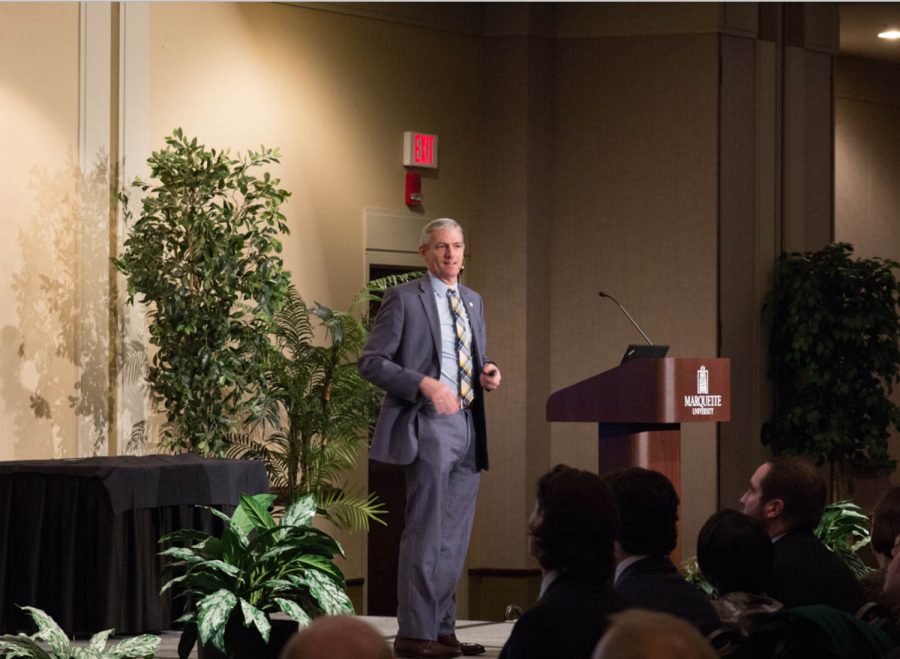 Lovell said the university plans to work with local companies to put a grocery store on campus. Finding a company to open a store on campus has been an ongoing process for years, but Lovell noted no specific plans in his address.

“If you’ve heard of a (grocery) company in this area, we’ve talked to them,” Lovell said. “We continue to have dialogues with a couple of them, but the challenge is that most commercial companies here pick a location and a radius around that location of the demographics and the population, and they’re not necessarily giving us a sign for support of a grocery store.”

Lovell implied companies didn’t understand how many students and faculty would shop there.

“We’re trying to really push the partnership idea and that we can work together in getting something commercially viable,” he said.

The new residence hall, currently being built on 17th and Wells, will be named in honor of former Marquette President Father Robert Wild. Wild learned of the news at the event.

“I’m really delighted by the recognition…I was shocked,” Wild said.

“The Ecksteins have been simply amazing in their generosity to this university,” he said.

Wagner and Melillo received the award after helping a Sodexo worker Ruby Brown move into her new home in October 2016. Brown presented them with their award during the ceremony.

MUPD Officer Josiah Williams received the award for his actions in July 2016. Williams came across a homeless family who had been turned away from a shelter, and worked with his colleagues to raise money to put the family up in a hotel.

“I am very pleased with many of the recent directions the university has taken since President Lovell joined us,” said Timothy Melchert, a professor in the College of Education.

Other highlights of the address included the announcement that homecoming will be returning in October 2017 and the new 707  Innovation Hub’s grand opening is set for March 27th. Plans for multiple new buildings were announced, including a new recreation center where McCormick Hall currently stands, and a new College of Business connected to Engineering Hall to create a new Innovation Alley.