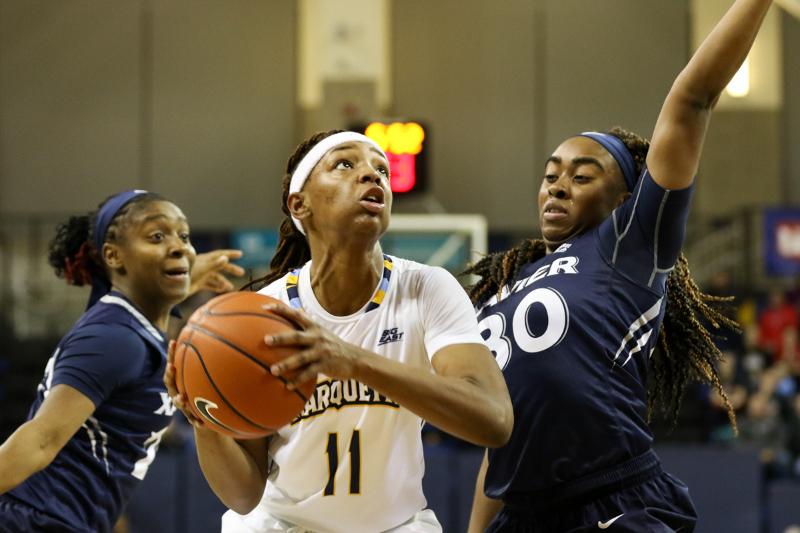 Allazia Blockton scored 23 points in the road victory against Xavier.

The Golden Eagles were flying high at the beginning, posting a 10-2 lead in the first few minutes.

The team then hit a rut, however, as Xavier used a 12-0 run to take a 14-10 lead, forcing head coach Carolyn Kieger to call a timeout.

Sophomore Natisha Hiedeman then took control, scoring 10 of the team’s last 14 points in the quarter. As a result, the team finished the half on an impressive 17-2 run.

“Natisha is a microwave,” Kieger said. “When she’s hot, she’s feeling it, and everybody is doing a great job getting her the ball at those points.”

Marquette made up for lost ground in the third, starting the half on an 11-4 run. This put Marquette in a position to match their season-high for points in a quarter with 29.

Blockton shined in the quarter, scoring nine of her 19 points in the third.

The sophomore star attributed her success to “just my teammates hitting the shots, getting open shots, finding me down the stretch and being confident in me.”

“The best thing (Blockton) had tonight was confidence,” Kieger added. “You could see it in her face, and everybody else feeds off it when she’s playing like that.”

This set up Marquette to expand their lead to as much as 28 in the fourth quarter.

While sophomore Erika Davenport did not have the scoring spurts that Hiedeman and Blockton had, she still managed to put up her third double-double of the BIG EAST campaign, scoring 13 points and 12 rebounds in 28 minutes of action.

“She’s a double-double machine, so if she can keep being that consistent for us, that just gives our guards more confidence to pull that pull-up (jump shot),” Kieger said. “Then (her teammates) know they got her under there to clean it up for them.”

Sophomore Danielle King also finished with double-digit points despite an injury scare in the second quarter.

“She’s fine,” Kieger said. “She just got the wind knocked out of her.”

“It was a complete team victory,” Kieger said. “We had 25 assists, which is incredible compared with seven turnovers.”

The team also sported a much-improved defensive look in the second half, limiting the Musketeers to 38 percent shooting.

“I’m really proud of our defense in the second half,” Kieger said. “I told them what they averaged and we held them to it. … That’s the first time that we’ve kind of locked down in a half.

This victory also accomplished Kieger’s goal for the team — to play 40 consistently strong minutes of basketball each game.

“Tonight’s the best we’ve gone for 40 consecutive minutes,” Kieger said.” “If we can capitalize on that and keep playing like that, we’re going to be scary.”

With this win, Marquette has matched their win total from last year at 14.

“I just told (the team) how far we’ve come in a year,” Kieger said. “Obviously we’re just getting started, but that’s a huge accomplishment to them and where we’re headed.”

“When we play like (we did tonight), I don’t really know a team that can stop us, Blockton said. “Everybody was playing great.”

Kieger also announced after the game that sophomore Olivia Moskari has had extensive ACL surgery and will miss serious time. Moskari has averaged 0.9 points per game in eight games this season.

The Golden Eagles will look to win their third consecutive home game Sunday as they host Butler.