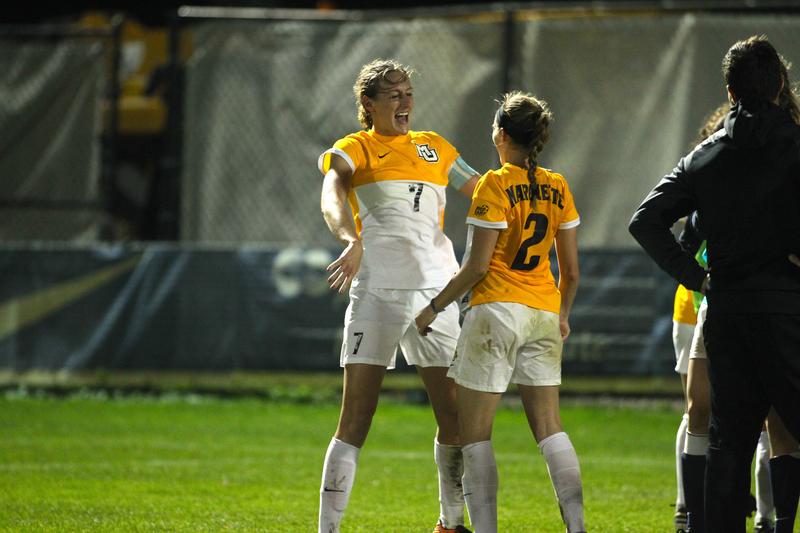 Morgan Proffitt is the second Marquette player to be drafted in the NWSL Draft.

Morgan Proffitt won’t have to go far from Marquette to start her professional career. The Chicago Red Stars took her with the No. 12 overall pick in the National Women’s Soccer League draft on Thursday.

“It means the world,” Proffitt said. “After college season was over, that was devastating. But I was hoping to continue playing and that happened today. Everything I’ve worked for kind of completed itself today so it was really exciting.”

The 2016 BIG EAST Defensive Player of the Year already has experience with Chicago, having played with their reserve team the past two summers. She won the WPSL title with them in summer of 2015.

“A few coaches called me, and then Chicago called me last and filled me in on what they were thinking,” Proffitt said. “So I kind of had an idea going in, but still anything can happen in the draft.”

Proffitt will rejoin her former college midfield partner Mary Luba, who was with the Red Stars first team last season.

“I loved playing with her at Marquette so I’m really excited to get back to that,” Proffitt said. “She’s a really, really good player. There’s a lot of great players on that team so it’s going to be competitive but it’s going to be so fun and good to see her again. She’s a really fun person to be around.”

The Columbus, Indiana native was the second NWSL selection in school history and the highest selection for the program. Maegan Kelly was the first Marquette player to be picked in the NWSL draft when FC Kansas City took her 35th overall in 2014.

Proffitt was already in Los Angeles for USWNT U-23 Training Camp. USWNT Head Coach Jill Ellis was in attendance training camp and the draft.

“That’s my ultimate goal with soccer (playing for the national team), that’s every girl’s dream, obviously. So just the fact that she said it’s a potential for some of us I was just kind of in shock, like this could actually happen in the future.”

Proffitt made the most of her senior season, scoring a career-high five goals and adding three assists. Two of those goals came in her team’s dramatic overtime victory over DePaul to earn a share of the BIG EAST regular season title.

In her four years at Marquette Proffitt earned three All-BIG EAST honors, two of which were first team selections, and was nominated for the MAC Hermann Trophy, college soccer’s highest honor.