Trump stops in Milwaukee for ‘thank you’ tour 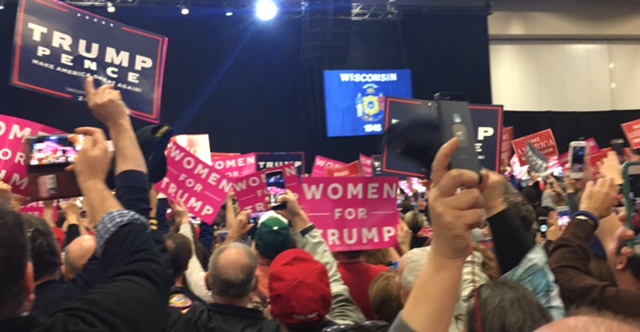 Audience members wave their signs in anticipation for President-Elect Donald Trump to take the stage.

President-Elect Donald Trump returned to Milwaukee Tuesday, as part of his “thank you” tour of several battleground states during the presidential campaign.

During the rally, Trump thanked his Wisconsin supporters and explained how he planned to “make America great again” by creating jobs to make America a “rich nation.”

Trump supporters stood shoulder-to-shoulder in the State Fair Exhibition Center as they listened to the president-elect reflect on his campaign.

Wisconsin went red for the first time since 1984 during this election, helping Trump reach the votes he needed to win. His victory surprised some of his supporters, and even the president-elect himself.

Trump went over the states he won that broke the “blue wall,” and reiterated his shock as he won each state.

Ahna Key, a sophomore in the College of Arts & Science and a volunteer at the event, said she was part of the minority at Marquette as a Trump supporter.

“We have a bunch of kids who would rather focus on social policy than economic policy,” Key said. “We’re trillions of dollars in debt and this is the man that can fix that.”

Trump said in the past the U.S. has been “taken advantage of by other countries,” and spent a great deal of money intervening in other countries. He cited the money the United States spent in the Middle East as an example. He believes the U.S. needed a “new direction.”

Now that Trump has secured his spot in the Oval Office, he wants to focus on job creation and growing the economy.

“To be a strong nation we must also be a rich nation,” Trump said. “My administration will be focused on three very important words: Jobs, jobs, jobs.”

Before Trump took the stage, U.S. Rep. Sean Duffy addressed the crowded. He praised Trump for having a “heart for the American worker.”

Trump said he plans to create a variety of jobs from “building cars, producing steel to curing disease.”

The president-elect said the U.S. currently has an $8 billion dollar trade deficit. He also claimed that America has lost a third of its manufacturing jobs along with 70,000 factories. He then added, “I know it’s right because I said it for the last month and a half and no one has corrected me.”

The audience then proceeded to turn around and boo the press, and chant “CNN sucks.”

The “boos” soon turned to cheers when Trump said he plans to start “winning” with health care, border security and ISIS.

Although Trump and Ryan had a tense relationship during the campaign, Trump said he has “come to appreciate” Ryan.

Ryan thanked Trump and vice-president-elect Mike Pence for “helping Wisconsin, Michigan and Pennsylvania finally see the light of day and put a Republican back in the White House.”

However, it was not just voters from battleground states who came to the rally. Constance Ilg, 58, and Travis Blue, 53, came all the way from Long Beach, California to hear the president-elect speak.

Blue and Ilg said it was difficult for them to talk about their party affiliation at home.

“If you’re a republican in California you have to go underground,” Blue said.

However, he said he knew from the beginning Trump would clench the presidency.

“When I saw Donald Trump on celebrity apprentice ten years ago, I said ‘that man is the president of the United States,’” Blue said. “I knew he was going to win from day one.”