Goodrich sisters share close bond on and off course 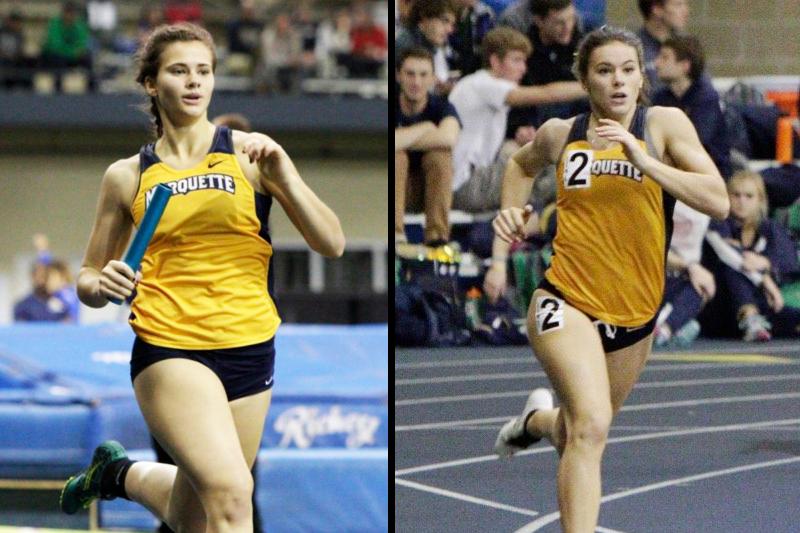 Junior Cassy and freshman Alex Goodrich have a unique bond both on and off the track. They both say the other is the lifeline to their success and each other’s ultimate training partner. They have always been with each other, despite their age gap and have motivated each other for as long as they can remember.

“We are both really good at pushing each other because we know each other’s strengths so well,” Alex said. “Whether it is lifting or running, I really like having that push back (from her) because even though it will be hard, in the end, we both benefit from our handwork and it’ll get us to where we need to be.”

Cassy set a new record in the 600-meter dash on Friday at the Blue and Gold Invitational, running a 1:30.01, while Alex, a hurdler, ran in her first race since suffering an injury in her senior season of high school.

Cassy is looking to improve her position from last season, where she finished runner-up in the 400-meter dash and finished third in the 4×400 race. For the junior, it is more about placement rather than getting faster times this season.

“I’m getting to the point where my times aren’t going to move a whole bunch just because I’ve been running for my whole life,” Cassy said. “With that being said, I still really want to perform well and keep up the good work in conference. The ultimate goal is to get (to the NCAA’s) in the 4×400. We’ve been to regionals enough times to get the feel, to get comfortable, but now I think it’s time to actually do something with it.”

Cassy noted that Alex runs with her once a week, and then a typical workout will be split into groups including jumpers, sprinters and multi-event athletes. The Goodrich sisters both agreed that although they are usually separated for most of the week, when they come together on Fridays as a team, it builds team chemistry and creates a sense of unity.

“Even as a freshman coming in, it is exciting to see,” Alex said. “It motivates me and they really help me visualize the runner I want to become.”

“My favorite workout days are Fridays,” Cassy said. “We will usually go down by the water at the beach and run the stairs. The atmosphere we develop is motivational. When you pass each other, saying each others and shouting ‘BIG EAST gold—Gotta win,’ it just helps make the atmosphere so infectious and makes for a really solid workout. It really makes you want to push those next five days, always striving for more. ”

Alex recently recovered from back-to-back shoulder surgeries during her senior year of high school and Goodrich says she has learned a lot from the experience, most notably in the road to recovery.

“Again, we talk about this push that we have between Cass and I, and this time, it was a different kind of push,”Alex said. “I had to be patient and needed to listen to what I needed to do, and push myself hard when I could. Cassy really helped me get past the injury and she really motivated me and helped me get back to hurdling.”

Cassy also learned a lot from Alex while she was rehabbing her shoulder.

“(Alex) taught me incredible patience,” Cassy said. “To watch her bounce back from that and not use it as an excuse has been an incredible teaching lesson for myself. None of us are invincible, but you just deal with your circumstances. I am incredibly impressed with her recover from that and continues to do better day after day.”

Both sisters are excited to get this season underway and will continue to push each other long after their Marquette careers are through.

“We both think that we can accomplish our goals,” Cassy said. “For us, we want to always be there for each other and I think this season will be great.”

“We’ve always been really close and have always supported each other,” Alex said. “I’m excited to watch her take those next steps this year. It’ll be special to be next to her and knowing that we are both in the Marquette jersey, cheering each other on through it all.”