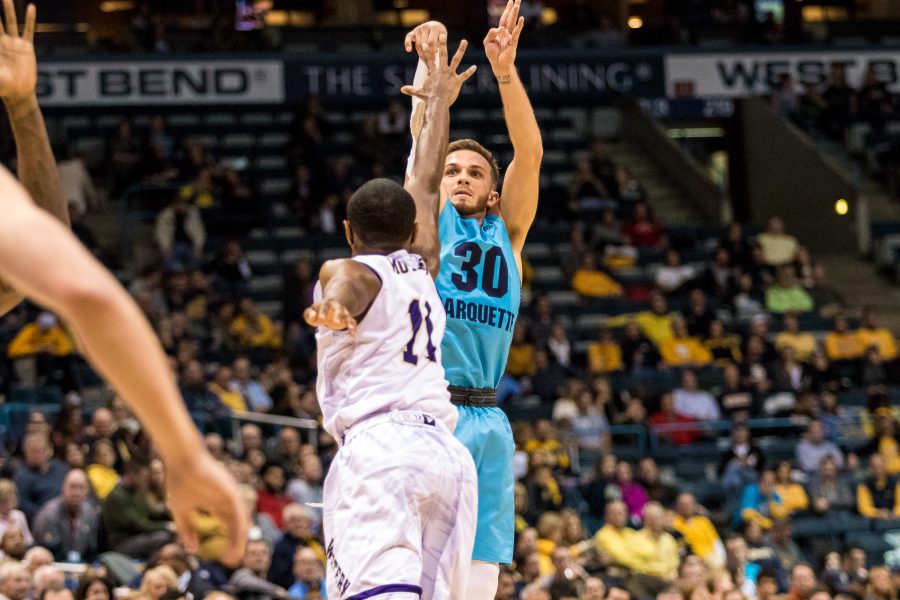 Andrew Rowsey scored a team-leading 21 points. 19 of his points came in the second half.

Not every “buy game” goes according to plan, but Marquette’s Wednesday night showdown with Western Carolina certainly did. The Golden Eagles took command early with an 11-3 run to start the game and they never looked back, demolishing the Catamounts 90-44.

Strong all-around play put Marquette up 56-18 in the first half.

“Our guys came really ready to play,” Wojciechowski said. “Played an outstanding first half. Obviously people are going to point to the shooting numbers which were really good in the first half, but I thought our activity defensively, we got a ton of deflections and I thought we really gave a solid effort on the defensive end of the floor.”

Markus Howard scored a career-high 17 points by going 4 for 10 from 3-point range.

Andrew Rowsey led the way with 21 points for the Golden Eagles by going 4 of 7 from beyond the arc, but for the most part the scoring was spread around. Four Marquette players scored double digits: Rowsey, Howard, Luke Fischer and Jajuan Johnson.

“Our thing is we want the ball to find the best shot,” Wojciechowski said. “On any given night that can be somebody different. In the second half it happened for Andrew (Rowsey).”

Marquette’s showed off their 3-point talents once again, knocking down 13 of 27 shots from long range.

“We’re definitely a team that can stretch the floor with our shooting ability,” Howard said. “Guys like Rowsey, Katin, Sam and I mean even Duane’s shown glimpses where he can really shoot the ball.”

The high-octane offense was matched by stingy defense as the defense gave up a season low 44 points.

“The emphasis on this game was definitely just finishing the game the right way,” Howard said. “He (Wojciechowski) didn’t want us to disrespect the game by not playing hard on defense. We showed that we played hard in the first half but in the second half we just continued that intenstity. We have to keep on doing that throughout full games because our schedule is going to get even harder as we go on.”

Fischer quietly had an efficient night. The senior played just 15 minutes but he scored 15 points and added five rebounds.

“All in all I thought it was a good night.”

The Golden Eagles (5-2) head to Georgia (5-2) next for their first true road game of the season. Marquette tips off against the Bulldogs at 1:00 p.m. Sunday afternoon at Stegeman Coliseum in Athens.