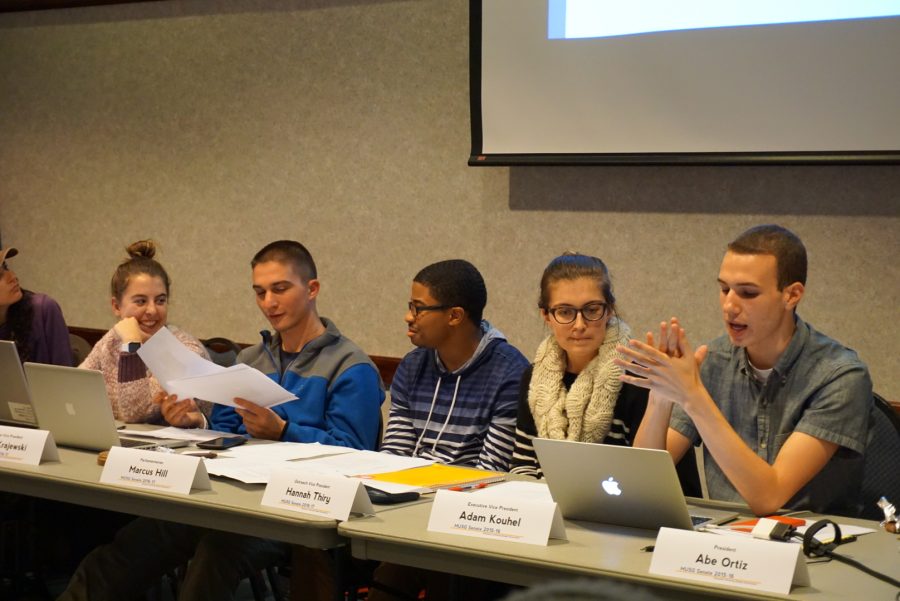 Marquette University Student Government tackled a full agenda, including some potentially controversial topics, at their Nov. 28 meeting. They debated possible MUSG office renovations, discussed the recent separation of the Student Organizations Committee and the Office of Student Development, and approved next year’s Financial Vice President.

The MUSG offices could be receiving $9,600 worth of new windows and furniture, if approved by the Senate at next week’s meeting.

Executive Vice President Adam Kouhel and Senator J.R. O’Rourke presented the proposed renovations and cited goals of increased student involvement and collaboration as validation for the allocation. The money would come from reserve funds, which accumulates from budget surpluses.

“These renovations are meant for the Marquette community,” Kouhel said. “It’s meant to be used by all students. We want them to feel comfortable coming into our space. I strongly believe the look and feel of our offices contributes to the success of our organization as a whole.”

The renovations would consist of new chairs and tables that can be reorganized for group meetings or individual study. It would replace the 20-year-old chairs currently in the office. There would also be windows looking out to the common area installed during winter break.

Not all senators are on board for the renovations, insisting that the money could be used more appropriately.

“I’ve talked to many people throughout the colleges, and the renovations are not serving a purpose. There’s a deeper concern in MUSG than new furniture,” Senator Roberto Santos said.

New organizations and clubs can be officially approved and recognized by the Office of Student Development, but without being approved by SOC, they cannot constitutionally receive funding from SOF.

O’Rourke said the rift has prevented at least six organizations from receiving funding.

President Abe Ortiz Tapia views the recent falling out as a wake up call.

“We need to look at how we are communicating with student organizations and we need to be as transparent as possible. After this we are hoping to be better at serving the student body,” Ortiz Tapia said.

After a lively debate, MUSG approved their new financial vice president, Bridget Ryan, a junior in the College of Business Administration.

Ryan was selected by a committee consisting of Ortiz Tapia, current FVP Cameron Vrana and several senators, and made an appearance at the meeting to answer any final questions from the rest of the senate.

There were concerns regarding her allegedly busy schedule, lack of experience managing large budgets and knowledge about SOF due to her not previously serving on MUSG.

“We are trying to find the best solution for a complex position and organization. We are not attacking her,” O’Rourke said in defense of those who were against her appointment.

Those who supported her for the position touted her enthusiasm, accounting background and actually saw her outside perspective as a positive.

“MUSG is a learning experience,” Senator Nic Schmidt said. “And she is obviously excited and enthusiastic to learn.”