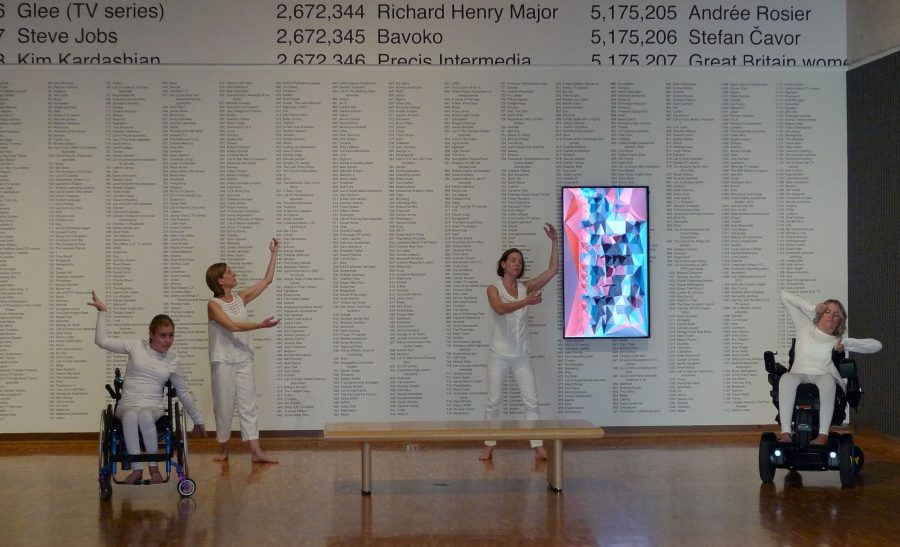 The exhibit is an installation from choreographer Heidi Latsky’s exhibit that is being featured in cities across the country. Photo courtesy of William Farr

The Haggerty Museum of Art will host “On Display,” an exhibition commemorating International Day of Persons with Disabilities Dec. 3.

“It’s a mix of all different people,” Lynne Shumow, curator of education at the Haggerty, said. “It’s meant to take away the stigma of looking at someone or being looked at.”

The exhibit is an installation from choreographer Heidi Latsky’s exhibit that is being featured in cities across the country. Catey Ott Thompson was a former dancer in Latsky’s dance company in New York City and was asked by her former mentor to lead the Milwaukee performance.

Ott Thompson brought her own dance classes to the Haggerty for their final projects and incorporated exhibitions with her choreography.

Three of the performers, or “movers” as Ott Thompson labeled them, are in wheelchairs. The other 18 performers are community members from Milwaukee, Marquette’s Department of Physical Therapy and theater professors.

Shumow worked closely with the choreographer for the event, developing advertising and helping set up the event.

This performance is different from Ott Thompson’s dances in several ways. It is silent and instead of telling a story, the “movement meditation” provides a window for the audience to stare.

“We are taught the concept of not to stare,” Ott Thompson said.  “Now the audience is receiving permission to look. I think all people have a layer of self consciousness about something. The vulnerability creates something like freedom or a release of pressure.”

The dance itself, Ott Thompson said, is more of a “movement meditation” done in slow motion.

“It’s slow motion and improvisation based,” she said. “The dancers have a mantra they can use when they need to calm a little more deeply, and that is ‘I am right here.’”

Latksy created the mantra to bring people back into the moment, Ott Thompson said. The performance is meant to bring awareness to self-consciousness.

“It calms any anxiety from being watched and observed,” she said. “In contrast, it calms the audience from feeling like they are intruding, which they aren’t they are welcomed to look.”

The movers will dance in slow movements with their eyes closed. As their bodies come to a position of rest, their eyes will open with a soft gaze. Once they are ready to move again, the dancers will close their eyes.