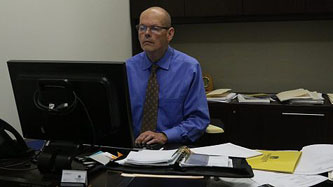 James (Jim) McMahon is retiring after working with Marquette for 23 years.

In 1993, Jim McMahon interviewed for a job for the last time in his career.

“There are times when you know something is right. But when I came over the lake and saw the Marquette skyline, I had a visceral reaction,” he said.  “I knew I had made the right choice.”

Now, the associate vice president of student affairs has announced his retirement after working for over 20 years to develop residence life.

One of McMahon’s recent accomplishments was creating a program to help first-year students understand the transition from high school to college. The first program ran during this fall’s 2016 semester.

“We are starting to get student evaluations back and we’re learning a lot,” he said. “With a group of 10 faculty, staff and one graduate student, there are a bunch of ideas on how things should be done.”

Despite his retirement, McMahon still wants to continue learning.

“I will be taking an English class in the spring at Marquette,” he said. “I studied English during my undergrad and I would like to take another course on it.”

McMahon has two sons who have both graduated from Marquette. He and his family are all season ticket holders for Marquette men’s basketball and will continue attending games during his retirement.

As for trips and other plans for retirement, McMahon is taking a brief pause to take care of his mother-in-law.

He will be the guest of honor at an event for his retirement in the Alumni Memorial Union Dec. 7.

“I’m excited,” he said. “It gives me a chance to say goodbye to people I have worked with. Some I haven’t seen in more than 12 years.”