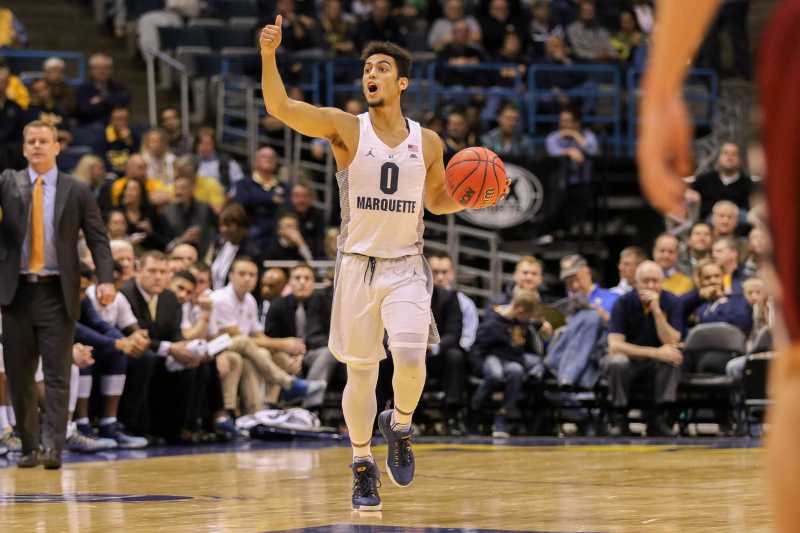 Markus Howard was one of a handful of youthful players in Tuesday's starting lineup.

In a surprise move, Marquette head coach Steve Wojciechowski started both freshmen Sam Hauser and Markus Howard as well as sophomore Matt Heldt. It was the first time senior center Luke Fischer was not named in the starting lineup since Dec. 31, 2014, a streak of 56 games. Wojciechowski said that the change was given to mix play up a bit.

“Our seniors know they’ve been given prime-time roles and sometimes when you have a disappointing performance, it helps to shape things up, and you definitely saw that tonight,” he said.

The move worked for Hauser, who had eight points, nine rebounds and an assist. Howard was quiet, registering five points and four assists. The seniors got the message and stepped up after coming off of the bench. Katin Reinhardt had 16 points, five rebounds and three assists. Luke Fischer had 14 points and four rebounds.

The Golden Eagles had 61 points coming off the bench to IUPUI’s 31, thanks largely to the talent outside the starting lineup. Luke Fischer (14), Duane Wilson (13) and Jajuan Johnson (11) all scored in the double digits, while Andrew Rowsey had five points. After a slow start to the game, the upperclassmen showed up and ultimately helped put the Jaguars to bed early in the second half. At one point, Marquette went on an 18-3 run in the second half in which Marquette made three 3-pointers and forced the Jaguars to use two timeouts.

This may be a given against a team like IUPUI, but Marquette appeared much more methodical in its shot selection Tuesday night. Let’s not forget, Marquette needed overtime last year to beat this same Jaguar squad. In the first half, the Golden Eagles had the hot hand and shot 60 percent from the field. They finished the game with a solid 57.1 shooting percentage.

Marquette transitioned well, scoring 31 points off of the fast break, and adding an additional 19 second chance points. Marquette had 52 points from inside the paint and dominated on the battle of the boards, out rebounding IUPUI 39-30. This points to a more effective offense, and the team taking their time to get the best shot for a given possession. The player who stood out the most in this category was Haanif Cheatham, who led Marquette with a team-high 22 points and was 8 for 11 from the field.

Stat of the Night

Marquette had 61 bench points, annihilating Friday’s miserable performance against Michigan in which the bench contributed a mere 14 points. Two of those bench points came from walk-on Cam Marotta, who made two free-throws. The other walk-on, Deon Franklin, had a block that got the crowd to their feet.

Next Up: Marquette will square off against Houston Baptist (2-2) at 6:30 Saturday, Nov. 26 at the Bradley Center.