Students march, walk out in solidarity for increased protection of marginalized students 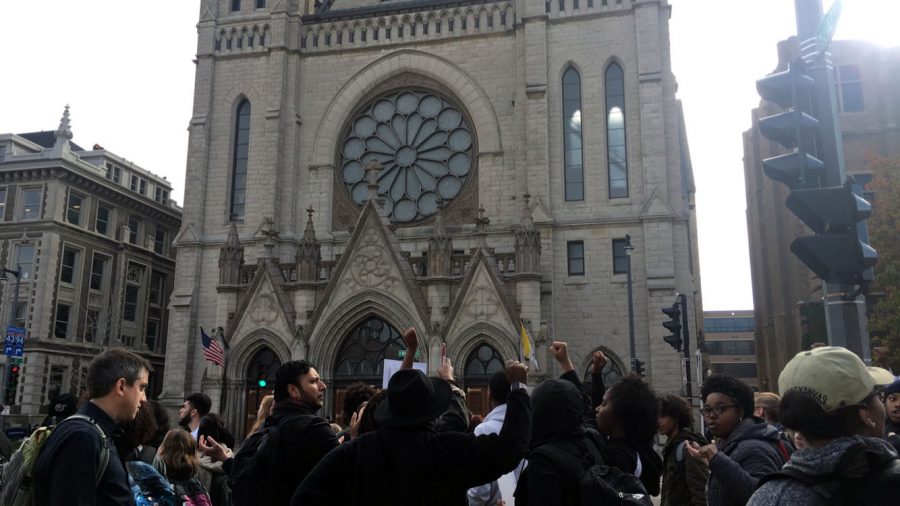 A student group called #OurCampus encouraged students to walk out of class at 12:30 p.m. to participate in the event.

Participants were asked to sign a petition that called on university administration to establish concrete policies and invest funds to protect undocumented or Deferred Action for Childhood Arrival, African-American, LGBT, Muslim and Latino students. The group hopes these new policies and funds will protect students against the increase in hate crimes that have occurred on campuses nationwide since the election of President-elect Donald Trump.

The march started at the Center for Intercultural Engagement in the Alumni Memorial Union and moved down Wisconsin Avenue to Straz Tower.

Miguel Sanchez, a senior in the College of Arts & Sciences, led students in chants such as “no hate, no KKK, no racist USA,” “black lives matter” and “the people united will never be defeated.” He said the walkout and march were important because they caused a disruption in everyday campus life.

“We wanted to remind folks who don’t face the same types of challenges and struggles each day that there are minority communities that attend this university and they deserve respect and to feel the same safety as other students do,” Sanchez said. “Students should not be targeted for their ethnicity, religion or sexual preferences.”

“We felt it was necessary to join in this national call for solidarity,” Sanchez said. “There are marginalized students that are in fear because white supremacy and racism have been empowered by the election results.”

Fabiola Magana, a junior in the College of Nursing, said college students need to speak out against injustice.

“We’re the future of this nation,” Magana said. “We need to show that we’re not going to let injustices continue.”

Magana said she marched to show that marginalized groups at Marquette are united.

“This year has been really tough, not only as a minority but also as a woman,” Magana said. “I think it’s important to let everyone know that we’re here to support each other.”

Bernardo Avila-Borunda, the assistant director for multicultural campus ministry, said that he marched to show solidarity with the diverse population of students that he works with.

“It’s important for me to support them and the things that matter,” Avila-Borunda said. “Also, as a Latino, I can identify with some of the issues that they’re dealing with and some of their fears.”

Chrystal Silva, a sophomore in the College of Arts & Sciences, said that she was happy with the demonstration.

“I feel like it was really effective,” Silva said. “We marched during a passing period so a lot of people saw it. It really showed support for groups that might be afraid for the future.”

The group hopes to get 1,000 signatures on their petition by Friday.

UPDATE 11/17/16: The University sent out another message to the Marquette community Nov. 17 from provost Daniel Myers, vice president for student affairs Xavier Cole and executive director for diversity and inclusion William Welburn. The message states the university will not tolerate any hateful acts “motivated by race, ethnicity, religion, age, national origin, sex, disability, gender identity or expression, sexual orientation, veteran or socioeconomic status.” It also highlights ways the university is addressing social inequality, including Marquette Forum events, the LGBTQ+ Resource Center and the Center for Gender and Sexualities Studies.