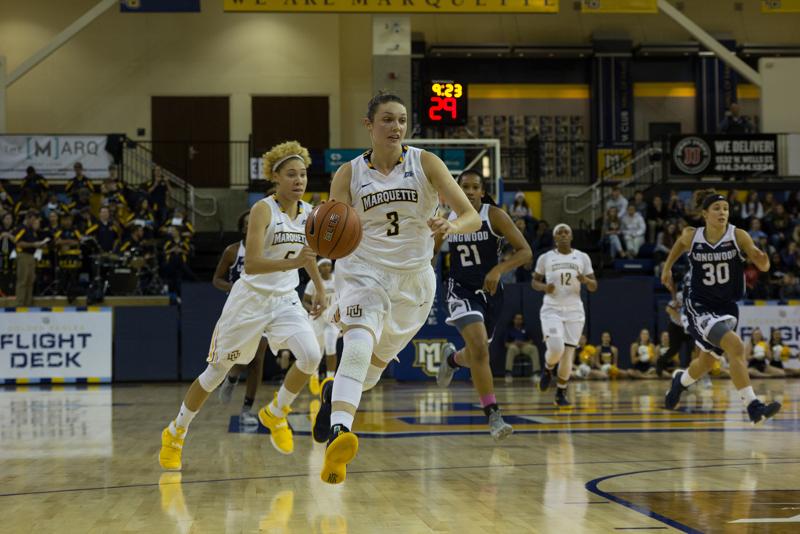 McKayla Yentz ignited the offense with an and-one basket midway through the third quarter.

It wasn’t as easy as the final score indicated, but following a 104-91 win over Saint Francis, Marquette women’s basketball is off to a 2-0 start.

“That was a gutsy win. That is a really good ball club and I really believe that they will win their conference,” Marquette head coach Carolyn Kieger said. “We knew it was going to be a fast pace game; they shoot a lot of threes and I thought that our team did a fantastic job of weathering the storms and fighting. I am really proud of our composure towards the end.”

Right from the tip, both teams set the fast tempo of the game by constantly running up and down the floor.

“I’m exhausted,” said guard Allazia Blockton, who finished with a team high 24 points. “That’s kind of of pace we want to play at. That’s what the fans like to see, they like to see us going up and down. That’s our pace; we like to play fast. We got a lot of subs, we trust our teammates, so I’ll play that pace any game.”

The Red Flash used the quick pace to take the lead in the first quarter behind a pair of three pointers from Jessica Kovatch. She was one of the nation’s top scorers last season and was coming off of a 29-point performance against Wisconsin Sunday. She finished the first quarter with 13 points, but only had 20 points in the entire game.

In the second quarter, the Golden Eagles gave up just one turnover, while the Red Flash recorded seven. Marquette was able to use those turnovers to go on a 17-5 run to overcome a 12-point deficit and tie the game up at 44-44.

Midway through the third quarter, momentum began to shift to the Golden Eagles thanks to some big time plays. First, senior McKayla Yentz stole the ball in the Red Flash defensive end and took it coast to coast to get the layup and the foul.

“That was huge,” Kieger said. “McKayla Yentz going coast to coast with a pick six, if that doesn’t fire you up I don’t know what does.”

Following that play, Yentz hit the free throw and then Erika Davenport got another and-one opportunity.

Further helping the Golden Eagles offense was the press, which led to nine steals, helping Marquette outscore Saint Francis 31-18 in the quarter and widen their lead to 82-73.

“I think our press gets us going, our press gives us energy and our players love to play it,” Kieger said. “I think that is kind of what got us back in the ball game and gave us momentum in the third quarter and into the fourth.”

No. 18 ranked Arizona State will come to the Al McGuire Center Saturday at 2:00 p.m.