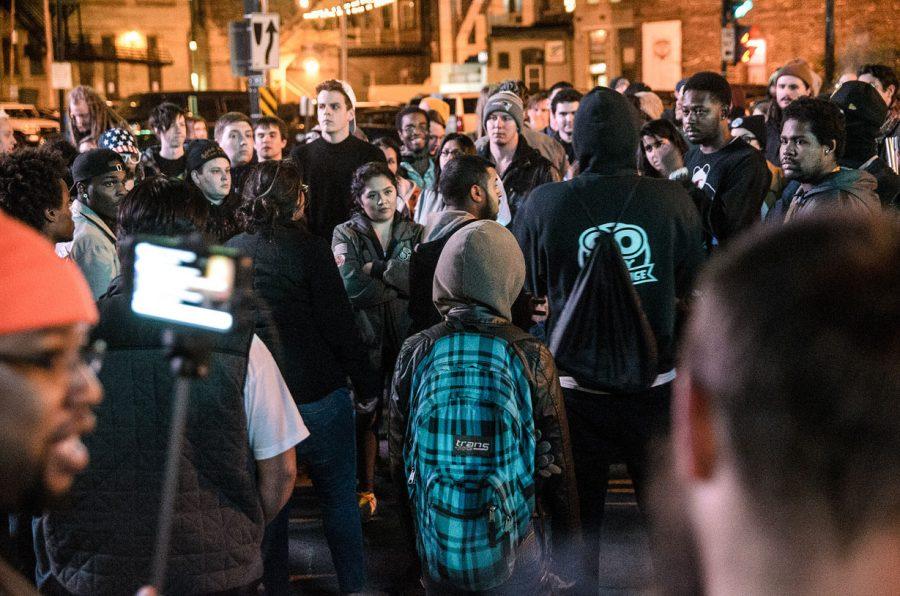 After Donald Trump was named president-elect Nov. 9th, some Marquette students celebrated the results and others coped with them. Some responded with prayer while others took to the streets to protest.

Various cultural organizations on campus held an event Thursday, Nov. 10th, in Westowne Square, calling for solidarity in the Marquette community in response to the election.

Students and faculty members linked arms to signify their joint support for minority students who felt victimized by Trump’s rhetoric during the election. They were also  invited to join in an interfaith unity prayer at the Chapel of the Holy Family in the Alumni Memorial Union.

Later that night, Marquette students joined the thousands of Milwaukee residents who gathered in Red Arrow Park for an “emergency march against Trump.”

Melissa Alburo, a sophomore in the College of Arts & Sciences, attended the march and voiced her frustration with the president-elect.

“The way he has handled this election and the way he presented himself shows there is no reason for him to have any spot in the White House,” Alburo said.

Alburo said she does not consider Trump her president due to comments about immigrants and the LGBT community.

Another student at the event emphasized the importance of nonviolent protest.

“You have to do this peacefully and rightfully,” Hannah Seeman, a sophomore in the College of Communication, said. “You can’t shame anybody who supported Trump because that’s not what America is about, and you would just be stooping to his level.”

The march was organized by various coalitions such as the Progressive People Movement, Black Student Union and Students for Justice in Palestine. Chapters from Marquette, the University of Wisconsin-Milwaukee and Milwaukee Area Technical College organized the event.

The Marquette and Milwaukee communities are not the first to have such strong reactions to the election results. Over 10 cities across the country had protests, including New York, Washington D.C., Philadelphia, Minneapolis, Baltimore and Dallas, according to CNN and other news outlets.

In response to the reaction from the student body, the Marquette administration sent out a letter late last week, calling for unity after the election results were announced.

The letter, titled “Dialogue, not division,” encouraged students with differing viewpoints to have a conversation instead of showing hostility.

“Differing viewpoints are natural and healthy, and we are all individuals,” Myers said. “But we have two important commonalities: we’re all human and we are all part of the Marquette family.”

Matthew Harte contributed to this story.