EDITORIAL: Marquette must stand against post-election violence and hate 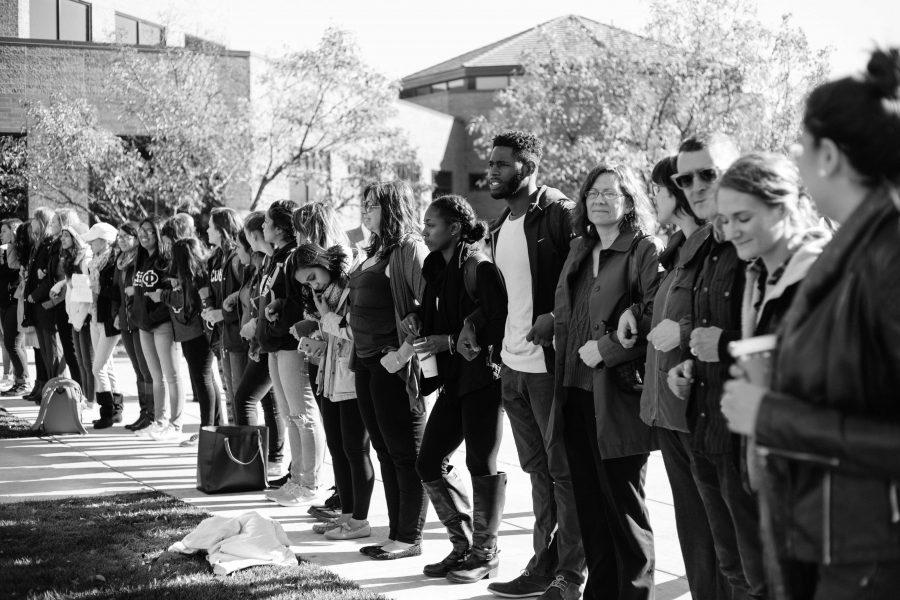 The Westowne Square gathering of many students and faculty standing and joining hands was important for this campus community because it was a physical and visual representation of the unity we must foster.

Donald Trump’s presidential election victory last week seems to have already sparked acts of hatred and racism around the country, with some extremely troubling incidents occurring on college campuses.

At the University of Wisconsin-Lacrosse, several students of color reported that they found offensive language written on their home’s front door in a neighborhood near campus the morning after the election.

At a fellow Jesuit school, Canisius College in Buffalo, New York, a black baby doll was found hanging by a noose in a dorm elevator the night of the election.

Xavier University in Cincinnati, another Jesuit institution, experienced a similar incident a few weeks before Trump was elected. A skeleton wearing African clothing hung by a noose in a dorm window next to a “Trump for president” sign.

Our nation’s new leader has publicly said discriminatory things against minorities and other oppressed groups. Trump ran much of his campaign making racist claims and using hate-filled speech to rally support. In May, he claimed that federal judge Gonzalo Curiel could not fairly preside over the lawsuit against his for-profit Trump University because he is of Mexican heritage. And Trump’s claim that Mexican immigrants were “rapists, bringing drugs and crime” into the U.S. still echoes from the campaign trail.

However, Trump’s comments and rhetoric during his campaign cannot be used as an excuse for people committing violent acts and inciting hatred toward minorities. No matter the president, disturbing demonstrations rooted in racism and prejudice have always happened, and bigoted attitudes exist everywhere in this country.

Although most of these incidents have been at the hands of Trump supporters, there have been acts of violence by anti-Trump supporters, as well. For example, the day after the election a man was brutally assaulted on Chicago’s West Side by a group of men who suspected he had voted for Trump.

It seems today, though, that the president-elect’s past public discriminatory speech has legitimized people’s feelings of hatred and justified their decisions to act on these feelings.

Here at Marquette, we the students need to set an example for our generation not only through our words, but also through actions that exude acceptance, inclusion and healing.

In fact, Donald Trump himself told supporters in Sunday’s interview with CNN to stop harassing minorities.

Last week, this Editorial Board expressed a call for civility and acceptance in the wake of the election results. Now, we are calling attention to another responsibility all Marquette students have. Actions of hatred, racism and bigotry have never had a place on this campus, nor will they ever, whoever the president may be. We must not participate in any actions resembling those at other schools that have caused harm and pain. We should also denounce behaviors of hatred. But what will be the most important thing — and possibly most difficult — for Marquette students to do now is to back up our words with actions.

Wednesday morning after the election, Provost Dan Myers tweeted a call to action which discouraged exclusion: “Today: Reach out to those in our lives who feel disenfranchised and degraded by this election with a signal of support and caring.”

The next day, he participated in and invited all students to attend an event put on by some of the university’s cultural organizations, Community of Feeling, a standing in solidarity with those struggling with Trump’s victory. There was also a unity prayer held afterward in the Chapel of the Holy Family.

The Westowne Square gathering of many students and faculty standing and joining hands was important for this campus community because it was a physical and visual representation of the unity we must foster. This Editorial Board has discussed the importance of this theme time and time again, advocating for social justice and change that must reach beyond Facebook timelines and Twitter feeds.

Many Americans went into crisis mode when Trump won the election, but his impending presidency is no reason to act without proper judgment. As educated Marquette students, we need to think critically and not allow the things Trump has said to add to any campus divisions. Standing together in solidarity was the first step. Now it is time for us to combat existing divisions head-on, ensuring that our campus will not be negatively impacted by the racism and violence that is all too common in the wake of this election.

We cannot predict how a Trump presidency will affect attitudes across America, but here at Marquette, we will never support the normalization of sexist, homophobic, islamophobic or sexually violent ideas. The campus culture we create today will affect all future generations of students. Let’s seize the opportunity provided by this monumental event in our nation’s history to lead our campus and our generation with attitudes of positivity, unity and acceptance.