After ‘Grinchy’ 2015, Starbucks holiday cups back on nice list 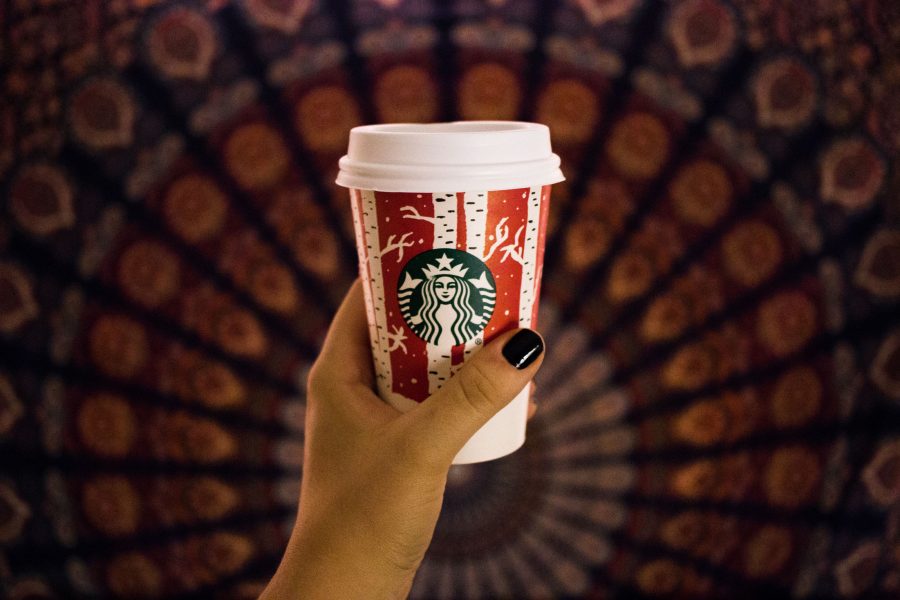 After removing holiday-themed symbols from its classic red cups in 2015, Starbucks faced rebukes from the public.

The coffee company was accused by a former Arizona pastor of “hating Jesus”  and “waging a war on Christmas” by a Christian social media celebrity. In an attempt to recover from the controversy, Starbucks debuted 12 holiday cups with designs inspired by customer art. The cups are still their signature red, but are printed with things like reindeer, strings of lights and ornaments.

The holiday cups debuted Nov. 10, nine days after a surprise switch to green cups, which a Starbucks representative, who wished to remain anonymous, said were transition cups.

“At first, people jumped to the conclusion that they were our holiday cups,” she said. “The green cups are actually a sign of unity. The design has over 100 people of different genders and ethnic backgrounds, and is drawn with a single, continuous line. The message is that we’re all one, be kind to each other.”

One student said she got a green cup, but didn’t know it had a deeper meaning.

“I liked the design on the green cup, and now that I know what it represents, I think it’s really cool,” Caitlin Raebig, a freshman in the College of Health Sciences, said.

Sam Dorow, a freshman in the College of Arts & Sciences, said she appreciates the gesture, but doesn’t think specially designed cups aren’t enough to fix the problem.

“I like the message with the green cups, but I think there’s a lot more to it than just to be kind to each other,” she said. “Throughout the election, there was a lot of battling on both sides and it will take time to fix the wounds and the things that were said. I think it was a good try by Starbucks to spread the message, but at the same time it goes a lot deeper than that.”

As for the holiday cups, Dorow, who describes herself as a “very religious person,” said she loves the design, and that people who complain need to move on.

“It’s just a cup,” she said, laughing and examining her own drink. “Last year when they took the designs off, I heard people saying that Starbucks was trying to take the Christ out of Christmas or something, but I just didn’t take it that way.”

Another Starbucks employee, who wished to remain anonymous, said she thinks this year’s holiday cups are a good recovery from last year, and they are more than just a marketing strategy.

“I don’t think they meant any harm last year, it kind of got blown out of proportion,” she said. “The new cups weren’t just from a marketing standpoint, though. As a company we really speak to being kind to one another. The owners of Starbucks are very outspoken about their belief in equality for everybody.”

She also said customers are reacting well so far.

“I saw a lot of people looking at the cups and snapping photos of their drinks,” she said. “The designs made a lot of people smile. Nobody can really be upset about these cups, and they work for everyone’s religion.”

Raebig agreed with the point about religion, describing the cups as simply festive.

“They don’t have crosses all over, it’s just snowflakes,” she said.