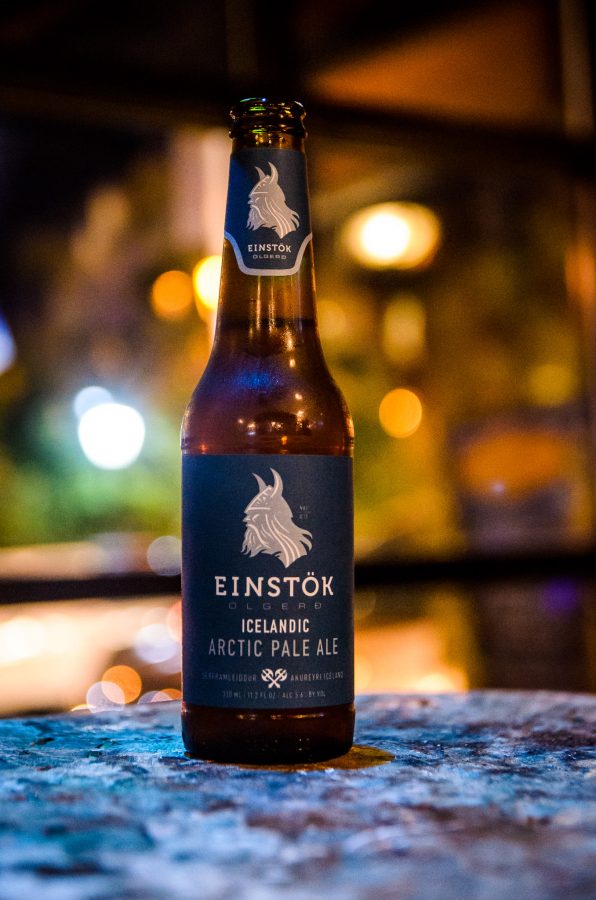 Many students had positive reactions to the new beer on the block last Friday.

From Marquette to Iceland and back to Caffrey’s, Einstok Beer Company combines a Wisconsin favorite with Viking brewing.

The Icelandic-American company just started distribution in Wisconsin and hosted a launch party at Caffrey’s, Nov. 11 from 5-7 p.m.

“It was a good idea to have this on game day,” Parker Nickelson, a senior in the College of Business Administration, said as foam formed at the top of his bottle of Einstok White Ale.

Jack Sichterman, the co-founder of Einstok Beer, is a Marquette alumnus. Branding, marketing and entrepreneurship were part of his college studies and work after school.

Branding, Sichterman said, is what makes Einstok so successful.

“I was doing branding work in Iceland with water companies and saw that no one was making beer with their great glacial water,” Sichterman said. “Craft beer was taking off at the time (around 2008), and I was interested in making something of my own. So it made sense to harness the water and explore the culture while trying to brew something we could sell.”

Sichterman worked to create a range of beverages that do not have many similarities to an average bottle of beer.

“Our scotch ale that’s coming out next year … is brewed with angelica root, which was used as currency, is said to ward off evil spirits and has medicinal purposes according to Viking tradition,” Sichterman said.

The beer itself is not the only aspect of the brand based in Viking tradition.

“We based our distribution off of Viking conquests – if you could sail there, we’re selling there,” Sichterman said.

They started selling in Iceland and the UK in 2011 and spread to California in 2012 to see how it fared in America’s larger craft beer scene. In 2014, the company expanded to Scandinavia and Germany and have been spreading throughout the United States and Europe since then.

“Germany is actually our fastest-growing market,” Sichterman said. “They’re a beer country, but they have their own traditions that are different from, say, American craft beers. And they haven’t had Icelandic craft beer before.”

While the company caters to an international market, it is based in Iceland. Sichterman said this adds to his brand.

“Einstok represents about 60 percent of alcohol exported from Iceland,” Sichterman said. “It’s very unique, which is where its name comes from, and partly why it sells so well across markets.”

For Sichterman, the decision to come home to Marquette was an easy one that was well received by staff at Caffrey’s.

“Now that it’s available in Wisconsin, it only makes sense to have (Einstok) here at Marquette,” Eric Titze, Caffrey’s manager, said. “They have great quality and range to their selection. They were able to take an American tradition in craft beer, bring it over to Iceland and export a great culturally based beer, and it’s even better when you know the people behind it are good people.”

The three beers on hand Friday were well received. Several students commented that the ales were creamy, smooth and refreshing. They found the Icelandic factor appealing and loved the Viking logo.

“I didn’t know what to expect, but figured I’d try it, especially since it was made by an alum,” Nickelson said.