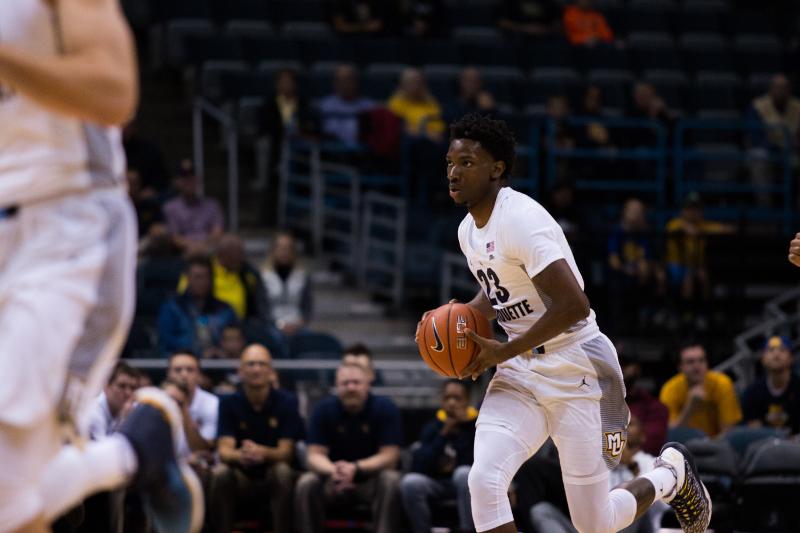 Marquette used their new aggressive style to their advantage in the season opener, blowing by the Vanderbilt Commodores 95-71 in Annapolis, Md.

At the heart of it all was Jajuan Johnson, who had a career high six steals in addition to a team-leading 21 points. As a team, the Golden Eagles had 13 steals and took advantage of an additional six giveaways by Vanderbilt, scoring 35 points off turnovers.

Coming into the season, Wojciechowski stressed that depth would help them play with more pressure consistently, and tonight showed how large his rotation is. Marquette went 11 deep, with Matt Heldt and Sandy Cohen playing the least frequently.

The Golden Eagles shot 53 percent from the field, six percent higher than their average last season, and 60 percent in the second half. That’s largely due to efficient outings from Johnson (9 for 13), Duane Wilson (4 for 6), Sam Hauser (5 for 8) and Luke Fischer (7 for 9), who took advantage of early foul trouble for both Vanderbilt big men.

When you factor in that the Golden Eagles were far from perfect, it’s an impressive win. Katin Reinhardt went 0 for 7 in the first half, but found a rhythm in the second. Heldt took four fouls in just three minutes of play, forcing Fischer to stay on the floor for long stretches. The Golden Eagles showed signs of potential in the first half, but four illegal screens was a frightening sign for Marquette’s new-look offense.

Marquette went into the locker room at half up down by one, but pulled away in the second with excellent 3-point shooting. The Golden Eagles shot 10 for 19 from deep in the second frame, including a perfect 3 for 3 from Johnson and 2 for 3 efforts from Haanif Cheatham and Sam Hauser. A 16-0 run near the beginning of the second seemed to knock Vanderbilt completely out of sync. The Commodores turned the ball over 11 times in the second half, including some that looked like passes to the other team. The sloppy play made for an easy opening game victory for the Golden Eagles, who were a one-point favorite in Las Vegas this morning.

Marquette returns to Milwaukee for the season opener against the Howard Bison Monday.