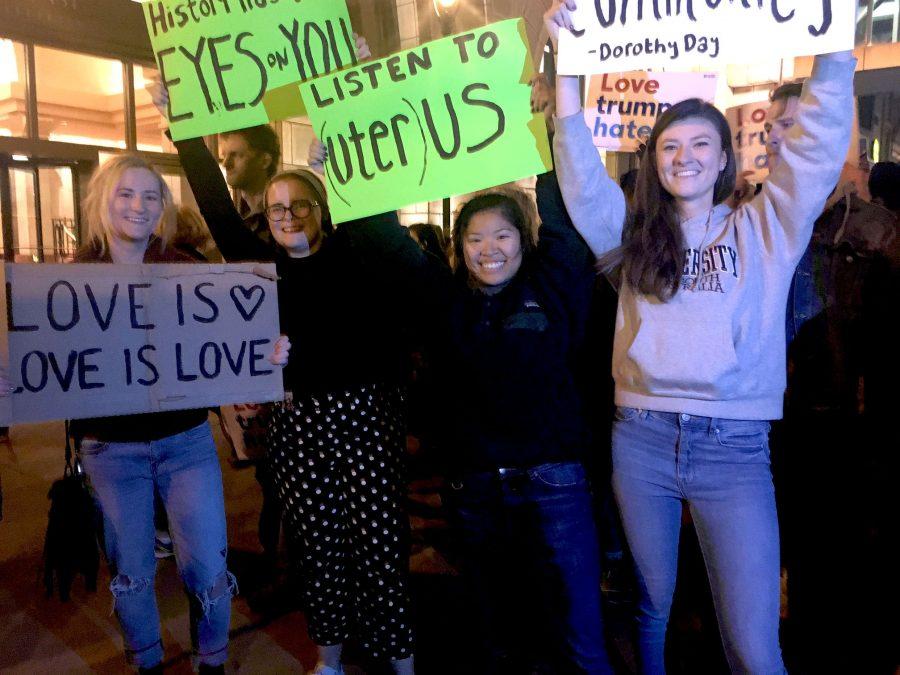 Thousands of Milwaukee residents gathered in Red Arrow park for an “emergency march against Trump.”

The event was organized by various coalitions such as the Progressive People Movement, Black Student Union and Students for Justice in Palestine. Chapters from Marquette, University of Wisconsin-Milwaukee and Milwaukee Area Technical College organized the event.

Camila Flores, a UWM student who was a part of the planning process, told her story to the crowd before the march.

“I represent the immigrants Trump wants to deport,” Flores said.

Flores is an undocumented student from Mexico, and said she thinks Donald Trump’s stance on immigration is unreasonable, because it was not her decision to come to the U.S.

“I came here when I was four,” Flores said.  “I followed my family. I didn’t have a choice.”

Protesters circled through downtown. They headed west on Wisconsin Ave. before turning north on 6th St. and then on McKinley Ave.

The march was conflict-free until protesters made their way back to Red Arrow Park.

A counter protester came with two young children. He was holding a white supremacy flag.

Protesters began to shout at him, then a member of the crowd seized the flag. The man took off on foot with the two children.

Hannah Seeman, a sophomore in the College of Communication, emphasized the importance of protesting peacefully.

“You have to do this peacefully and rightfully,” Seeman said. “You can’t shame anybody who supported Trump because that’s not what America is about, and you would just be stooping to his level.”

She added that events like the march can also be used for community building.

“It’s increasingly important to come to things like this because you need to build community,” Seeman said. “Even if you don’t support Clinton and you’re a third party supporter, this is the place to be.”

Seeman is one of the many Marquette students who attended the event. Sam Langheim, a sophomore in the College of Arts and Sciences, said he came for support.

“I know there is nothing that can be done at this point,” Langheim said. “My justification for coming out here is I want to stand under a banner of love.”

Langheim stressed the importance of solidarity.

“I want to show everyone that no matter what Trump does, at this point we all still stand together.”

Melissa Alburo a sophomore in College Arts & Sciences said she marches because she thinks Trump is not fit to be president.

“The way he has handled this election and the way he had presented himself shows there is no reason for him to have any spot in the White House,” Alburo said.

Alburo said she does not consider Trump to be her president due to comments about immigrants and the LGBTQ community.

“He has just insulted so many Americans,” Alburo said. “I have no words and I do not acknowledge him as my president.”

Sarah Ghouleh, senior in the College of Arts & Sciences, echoed this concern.

“I’m here because we have a president who stands for so many bigoted ideas,” Ghouleh said.

Ghouleh added that she was glad she could be a part of the march.

“This atmosphere is amazing. It’s very inclusive,” Ghouleh said. “There’s all sorts of people here, all different kinds of minorities.”